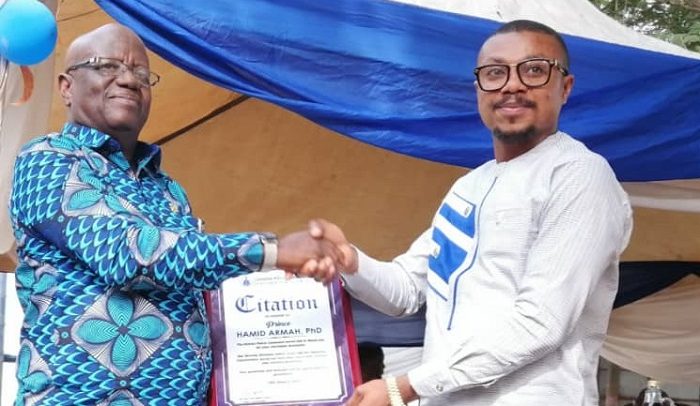 The Kwesimitsim District Police Command has honoured the Executive Director of the National Council for Curriculum and Assessment (NaCCA), Dr Prince Armah, with a citation for his charitable donations to the district police command.

The presentation was made on behalf of the police by the Effia-Kwesimitsim Municipal Chief Executive (MCE), Kojo Acquah, at a get-together organized by the district commander, Chief Supt Peter Lennox Aidoo, for police personnel.

The citation, which was signed by the district police commander, read in part “our security situation within Anaji and the adjoining communities would not have been much safer without your extreme generosity.”

It continued “your generosity and foresight will be appreciated for generations.”

Chief Supt Aidoo praised the NaCCA boss and said it was only proper to bestow such honour on him.

Receiving the citation, Dr Armah expressed gratitude for the kind gesture and prayed for God’s protection, guidance and blessings on the life of the district commander and the entire police personnel.

It would be recalled that in September last year, the NaCCA boss who is also the founder of Prince Armah Foundation, donated three motor bikes to the Kwesimintsim Police Command as part of efforts to help fight crime in the area.

The gesture was also to aid the police command in the protection of lives and property in the Kwesimintsim Constituency of the Western Region, in view of the increasing rate of armed robbery cases which were being recorded in the area.