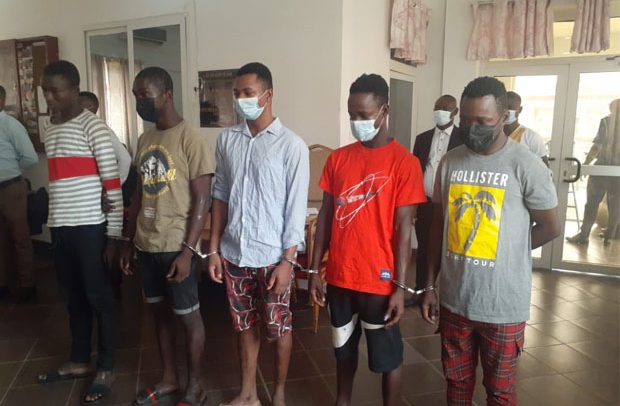 THE ASHANTI Regional Police Command has arrested five suspects and is also on the heels of a 22-year-old senior high school (SHS) graduate said to be the gang leader in a robbery attack on a bullion van that led to the killing of a policeman at Adansi Nyankomasu recently.

Identified as John Appiah, nicknamed as ‘Omega’, the police have described him as “very wicked” and “trigger-happy” and said the key suspect had recruited and formed several deadly robbery gangs in several parts of the country to engage in high scale robbery expeditions.

“The Regional Police Command has mounted a manhunt for John Appiah, alias Omega, a 22-year-old SHS graduate, who is said to be the leader of the robbery gang. Intelligence has it that Omega is a very violent person, trigger happy and ready to kill his victim at the least instance,” the police has announced.

Addressing a press conference in Kumasi yesterday, COP Kwasi Mensah Duku, the Ashanti Regional Police Commander, also disclosed that Omega “has also recruited other criminal gangs in other part of the country and calls on them to embark on his robbery escapades when the need arises.”

According to him, Omega and some of his accomplices have so far managed to escape arrest, saying that the police were doing everything possible to apprehend him to face prosecution; adding that the arrest of the five suspects in connection with the bullion van robbery case was good for the country.

According to the commander, intelligence established the identity of the suspects and arrested them at their various hideouts in Techiman in the Bono East Region, Kumasi in the Ashanti Region and Kasoa in the Central Region.

COP Duku said two out of the five apprehended suspects were already on the police wanted list in the Bono East Region in connection with a similar bullion van robbery case.

“Suspect Kofi Mathew, alias Wiser, and Martin Tei, alias Kwaku Darko, are already on the wanted list of the Bono East Regional Police Command for their involvement in the WESTEC Security bullion van robbery which happened on the May 8, 2020,” the regional commander said.

Subsequent to the arrest, he said “a cash sum of GH¢53,934 together two Toyota Collora saloons, a tricycle (Pragia) and two motor bikes were retrieved from the suspects.

“The suspects admitted the offence during interrogation and said they acquired the items mentioned above out of their share of the booty. Other personal effects suspected to have been bought from the booty were also retrieved and retained for evidential purposes.”

It would be recalled that a bullion van, belonging to the Delta Security Company, which was transporting cash sum of GH¢500,000 from the Ghana Commercial Bank Dunkwa-On-Offin branch to the New Edubiase branch was attacked and a police escort was shot and killed in the process.

COP Duku, on behalf of the police administration, wholeheartedly thanked the public for their support, which led to the arrest of the suspects.