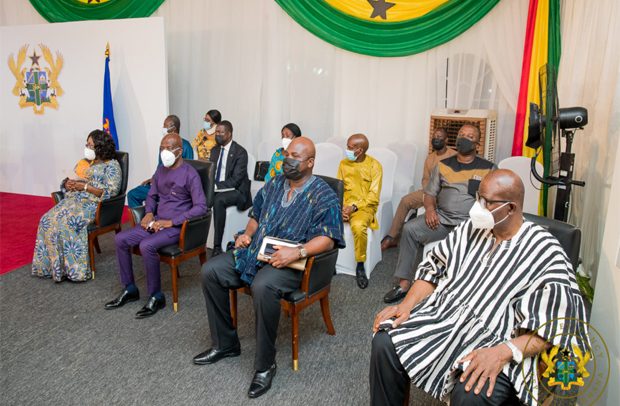 He entreated them to ensure peace, law and order in their respective regions to further Governments agenda for the development and progress of the country.

“All our plans and programmes will come to naught if there is no peace. You must be careful and tactful in managing issues of intelligence and security,” the President told the regional ministers at a short ceremony at the Jubilee House, Accra.

President Akufo-Addo told the ministers that regions were the natural target for all the programmes that his first term administration embarked on, and is introducing in the second term to grow the national economy, saying, “This is a good time to be in charge of your regions as you have the opportunity to help transform the regional economy.”

“In our pursuit of rapid industrialisation and value addition to agricultural produce, the regions will continue to be the focus of our drive towards mondernising our agriculture, improving production and efficicney, and food security, as well as profitability for our farmers.”

The President urged the ministers to acquaint themselves with relevant laws and work closely with the Metropolitan, Municipal and District Chief Executives in their respective assemblies, traditional authorities, opinion leaders, religious leaders and other key stakeholders in their respective regions.

“As you assume your respective offices, I urge you to provide leadership that will ensure that the work on which we are collectively embarked benefits the progress of our nation and helps raise the living standards of our people… that is why we were here. And that is why the people voted for us again.

“I pray that you will not let the citizens of your respective regions down, that you would not let government down, and that you will not let me down. I’m expectant with the various backgrounds and experiences of each one of you will bring value to the governance of our nation and enable us also to deliver on the commitments of our Manifesto.

“I am counting on you to add to the work of government so that together we can deliver on our mandate from the Ghanaian people. I look forward to working closely with you to bring progress and prosperity to our nation,” the President said.

Thursday’s ceremony brings to 45, the number of ministers so far sworn into office by the President in his second term.