Prof. Mike Oquaye And His Leaders Make History In Parliament 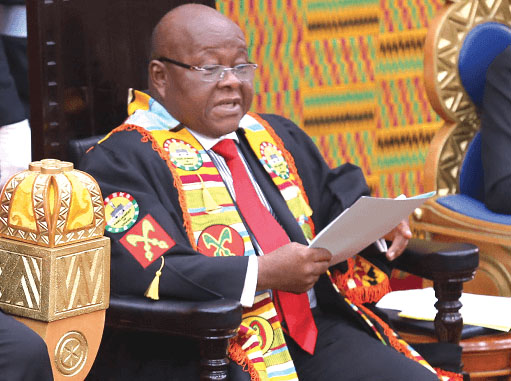 A jinx has been broken as Prof. Aaron Michael Oquaye, the Rt. Hon. Speaker of Parliament, and his leaders made history in Ghana’s Parliament. For the first time in the annals of our parliamentary history in independent Ghana, the Seventh Parliament of the Fourth Republic on Thursday, 16th July 2020, adopted a Motion for the enactment of Private Member’s Bill.

Over the past 25 of parliamentary democratic practice in the 4th Republic, non-minister Members of Parliament could not initiate laws from the House. The change in paradigm started when during the inaugural speech of the Rt. Hon Speaker, he intimated that the provisions in Article 108 did not stop MPs from introducing legislation but only sought to provide areas that were exempted.

The adoption of the Motion captioned: ‘That this Parliament deems it appropriate and fit to begin to enact Private Members’ Bills’ which was moved by the Hon. Osei Kyei-Mensah-Bonsu, Majority Leader, and seconded by the Minority Leader, Hon. Haruna Iddrisu, is a clear manifestation of the unanimous support from both sides of the House to accept the introduction of the Private Members’ Bills. The Bills will cover limitless areas and several issues to provide opportunities for individuals and civil society organisations to help Parliament tighten laws and provide for better social and economic policies. This will need building a stronger consensus from within Parliament and the co-operation between the Executive and the Legislature.

It must be acknowledged that in our jurisdiction, Article 108 has influenced the direction for our law-making procedure.

We have unfortunately misconstrued the expression ‘charge’ in Article 108 (a) (iii) to mean that all bills introduced in Parliament impose a charge, levy or tax on the people, thus, it is only the President and the Executive who can introduce bills to Parliament. Essentially, the Executive knows what is in the public purse, hence, laws that require imposition of taxes should be left to them.

Matters concerning affirmative action, environmental improvement, the rights of children, equality and protection of human rights, galamsey issues, factory regulations and protection of workers, laws on environment, gender, public order, security, public safety, sports, marriage, agriculture, hospital complaints, maternity leave, sexual harassment at the workplace, kidnapping, non-custodial sentence regime, protection of local industries, consumption of local produce, etc., can be tackled by private members legislation which will not be a ‘charge’ on the Consolidated Fund.  After all, the Executive will have to ultimately give their consent to any Bill before it becomes Law.

Many other countries, including Australia, Canada, India, Norway, UK, South Africa, Burundi, Kenya, Tanzania and Uganda have Private Member’s Bill as a good addition to fill in the lapses in their national laws. Progressive and social legislation require the corrective efforts of society as a whole. The introduction of Private Member’s Bill is a reformist complement to the efforts of the Executive.

Unfortunately, the Parliament of Ghana had till the historic day of 16th July 2020 laboured to extricate itself from the restraints imposed erroneously by the interpretation of Article 108 in such a way as to be a fetter to the right of Parliament as an arm of government responsible for making laws and to question its capacity to initiate and enact laws.

In fact, prior to becoming the Speaker of the Seventh Parliament, Prof. Oquaye had captured the frustration of Parliament’s inability to take advantage of the constitutional and Standing Order arrangements of the House. Hence, in his inaugural address, he stated that “the controversy relating to private members’ bills should be resolved”. He also indicated that “the narrow view has been taken that every bill has financial implications, including the paper on which it is printed and the clerks who work on it who are paid by government. Consequently, only governments can initiate legislation. This should change”.

True to his word, the Rt. Hon. Speaker has delivered to his promise! The visionary Prof. Mike Oquaye foresaw the need to establish a Legislative Drafting & Legal Services Department in Parliament (hitherto Parliament worked without a Legal Department) to equip Members of Parliament to enact laws. With the support of STAR-Ghana Foundation and the active involvement of the leadership of Parliament, the Parliamentary Service Board, together with the Legal, Legislative and Drafting Department, a series of stakeholders’ conferences were held last year. Think tanks, senior editors in Ghana, donors, especially Star Ghana, Nana Dr. S.K.B. Asante, the Hon. Learned Attorney General, Mrs. Ofori-Boateng and other experts contributed to a process coordinated by the Speaker. The conferences focused on sensitizing and bringing on board editors, media influencers, civil society organisations, legal luminaries, the clergy and former clerks to Parliament to assist in brainstorming on some of the areas of injustices and lapses in our legislative processes and laws and the way forward to Private Members Bills. The consensus was phenomenal.

On occasions when this legislative tool is employed for the good of society, certainly the visionary leadership of the Rt. Hon. Speaker Prof.  Aaron Michael Oquaye will be acknowledged by the good people of Ghana.

This piece is a modest opportunity to acknowledge and thank the collaborative efforts of Rt. Hon. Speaker, Prof. Aaron Michael Oquaye, his deputies and leaders for enhancing the legislative processes in the Parliament of Ghana.

The public are invited to submit any good idea and proposal for legislation to the Legal Department of Parliament, the Speaker’s Block, for attention.