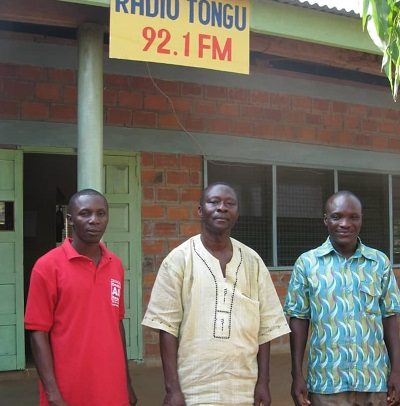 The Executive Director of Radio Tongu, Bestway Zottor in the Middle

Radio Tongu 92.1 FM, a community radio station at Sogakofe in the South Tongu District of the Volta region has been shut down by the National Communication Authority (NCA).

The closure which took effect at 6:00pm from last Tuesday, 11 February 2020, is as a result of what the NCA described as a decision taken in the interest of national security.

A letter dated February 5, 2020 and signed by the Director General of NCA, Joe Anokye, said following investigations of various petitions received concerning the operations of the radio station, managed by the Tongu Community Multimedia Network, the NCA has suspended the operations of Radio Tongu in accordance with Section 13 (1) (e) of the Electronic Communications Act, 2008 (775) which says, “The Authority may suspend or revoke a licence or a frequency authorisation where the suspension or revocation is necessary because of national security or is in the public interest.”
The letter sighted by DGN Online further noted that failure to comply with the directive will result in the arrest and prosecution of the directors of the radio station.

The directive comes few weeks after the Executive Director of Radio Tongu, Bestway Zottor was detained by the Police over alleged involvement in the promotion of the secession of Volta Region.

Mr. Zottor was arrested on Wednesday, January 15, 2020 at his residence after playing hide and seek with the security personnel who had attempted to arrest him the previous day; Tuesday, January 14, 2020.

Mr. Zottor who is a known supporter of the activities of separatist groups in the Volta Region, particularly the Homeland Study Group Foundation (HSGF) is said to be using the community radio station to promote the agenda of the Separatists; to create a new country out of Ghana (Western Togoland) by carving out the Volta region, the Oti region and parts of the eastern part of the northern regions of Ghana.

What broke the camel’s back was when he took his support to another level on Monday, January 13, 2020 (two days before his arrest) when he allegedly made a broadcast of secessionist sentiments, including inciting supporters of the secession to rise against the state and security authorities to claim their own country (Western Togoland).

An audio recording of the broadcast in the custody of Daily Guide sites Bestway attacking the media, the Volta Regional Minister (Dr. Archibald Letsa), national security and government in very distasteful words.

Most of the words used by the senior media personality were unprintable, scandalous and slanderous as it tarnished and lowered the image of the media, the Minister, national security and government in the estimation of the right-thinking members of the public.

He is also heard in the recording daring the national security to take recorders and mobile phones to record him carefully and arrest him if they so wished and that he was ready to face whatever consequences that befell him after his utterances.

Mr. Zottor in his utterances indicated that he had been incensed by the caution of the Volta Regional Minister, Dr. Letsa to media houses to be circumspect in their coverage of the Western Togoland Agenda. He warned Radio Tongu in particularly for their neck deep and one sided promotion of the lies of the Homeland Study Group Foundation (HSGF) geared towards creating a new country out of Ghana. According to the minister their act was a threat to national security.