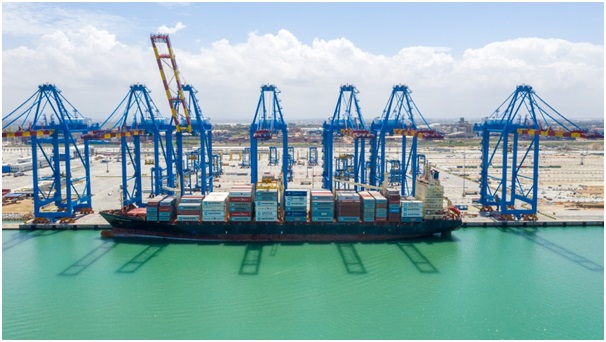 On Wednesday, June 5 2019, The Tema Port Expansion Project of Meridian Port Services Limited has successfully docked The test Vessel alongside the Quay at the MPS TERMINAL-3.

She is the first Container Vessel to be handled in this new harbour basin; She was smoothly brought by the GPHA Harbour Master and the Pilots with the support of the harbour crafts through the newly dredged entrance channel up to mooring her safely alongside the First New Berth. The Berthing of the vessel was also attended by all authorities including Customs, Immigration, Health etc.

This state-of-the-art terminal is equipped with different devices and equipment that make up the whole terminal. The principal objective for bringing this Vessel is to run a full-scale test of the port and train the staff in readiness for the Go-Live.

The Chief Executive Officer of Meridian Port Services Ltd, Mohamed Samara explained that the MPS Operations Team are shifting gears from systems and equipment commissioning to integrated testing and now simulating a full-fledged container terminal operation between yard and vessel.

Mr. Cyrille Lemee who is the Head of Business Transition said:  The overall scope of the test will involve testing not just operations at the waterfront and yard but also more importantly the Terminal Operating System (TOS) and the full planning process of receipts and delivery.Subsequently, we would put together results from this trial operations analyse them, identify all gaps and prepare for the next vessel call.

On how prepared the Operations team were for the scheduled Go- Live of the new port, the Operations Manager, Mr. Emmanuel Ohene Addo gave the assurance that His team were up to the mark. For the Go- Live, every member of the operations team is undergoing training and retraining. They include the operators, planners, supervisors and Managers. So far, the training process has yielded the expected results and we expect more improvement going forward especially during this time when we are running simulations using test vessels. I can confidently say that the team is ready and come 28th June, we will Go-Live.  He added.

The Project Director, Mark Nolet mentioned that in the run up to Go-Live,construction team would fully hand over the facility comprising all installations in the yard space, quay side and offices to the operations team. As this is a continuing project, the construction process will still be on-going without having any impacts on the operations that would be conducted when the Port goes live. We hope to achieve our targets of completing the 2nd Phase of the project in record time as we are already 2 years ahead of schedule.

When asked about the cost associated with this Vessel Call, Mr. Samara said, “We are ensuring that we thoroughly undergo the litmus test. Chartering such vessel to simulate operations among other costs will sum up to almost 250,000Dollars.That being said, when it comes to training, the cost involved cannot be compared to the benefits that would be gained.”

The Tema Port Expansion Project is spearheaded by MPS and drawing strength and sophistication for its shareholders, described as the biggest and most efficient container terminal on the Western Coast of Africa with a deep water draft of 16 meters, it has the potential to catapult Africa into a different level in the world shipping industry by creating new service routes & connections and opening up the market for Africa. It would also reduce freight costs and position Ghana as a model maritime nation.