Rebecca’s “Because I Want To Be” Goes to Teshie, La 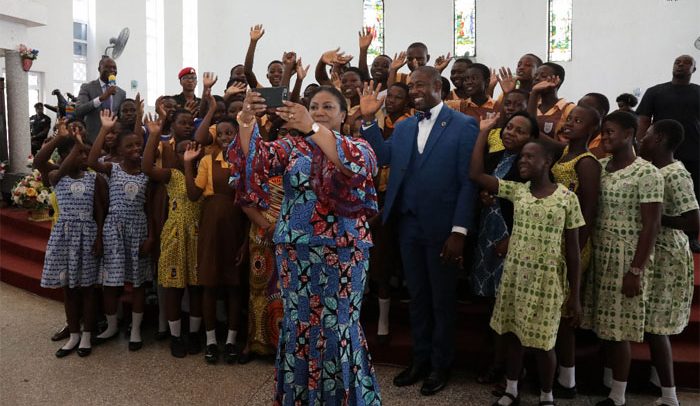 The “Because I Want To Be” project by the Rebecca Foundation has been launched in La and Teshie.

The iniative is to give hope to young girls at Teshie and La who thought they could not achieve their innate dreams.

The project, an initiative of The Rebecca Foundation is geared at providing attractive and encouraging platforms for girls in school to achieve their aspirations.

It is also to afford ladies who for one reason or another dropped out of school before completion, the opportunity to acquire vocational skills to secure professions which will enhance their livelihood.

Launching the “Because I Want To Be” project at Teshie Salem Presbyterian Church, and later at La Bethel Presbyterian Church, both in Accra, First Lady of The Republic of Ghana and founder of The Rebecca Foundation, Mrs Rebecca Akufo-Addo said the old adage that “educating a woman is educating a nation” will only be limited to lip service if pragmatic measures are not taken to empower women both academically and professionally.

She said the “Because I Want To Be” project makes available to young girls, model female adults who have overcome the challenges of poor homes, early pregnancy and other social inadequacies to achieve their innate dreams academically and professionally.

According to her, several otherwise promising girls either perform poorly academically or give up too early in their quest for a promising profession, because of social challenges they encounter along the way.

She said the “Because I Want To Be” project will offer girls who dropped out of school for financial or other social reasons, the opportunity to acquire vocational skills that will make them employable and so self-sustaining, emphasising that the quest for women empowerment and equality will be fully achieved when fertile opportunities are made available to them to fully harness their academic and occupational potentials, the core motivation behind the “Because I Want To Be Project”.

Present to support the launch of the project at Teshie was the Member of Parliament of Ledzokuku Constituency, Hon. Dr. Bernard Oko Boye.

He recounted how his father, a mason and his mother, a fishmonger squeezed water out of stone to support the education of his siblings and himself because of its immense benefit, stating, “today, there is no doubt that the sweat and toil of my parents have paid off.

We are what we are because we had their guidance and financial support and through that we have pulled them out of their economic quagmire”.

The Hon. MP committed to supporting the “Because I Want To Be” initiative in various ways including cash donations to participants who take advantage of it to realise their dreams.

On his part, Member of Parliament for La Dadekotopon, Hon Vincent Odotei Sowah urged his constituents to take advantage of the “Because I want to Be” project to advance their education and acquire occupational skills that will make them self-sustaining, stating that the project was one which if committed to, would break the vicious cycle of poverty and unemployment as well as serve as a catalyst for women empowerment.

Deputy Country Head of the United Nations Population Fund (UNFPA), Madam Erika Goldson said her organisation is very impressed with educational policies of governments such as the Free Compulsory Universal Basic Education and the Free SHS policy and was touched by the “Because I Want To Be” initiative.

She promised that the UNFPA will support and ensure the success of the project.

The “Because I Want To Be” project has been lauded by traditional rulers, educationists and religious leaders who have described it as a policy which effectively serves as a crane to lift the girl out of a dark pit of poverty and hopelessness, onto the high platform of academic, occupational and social success.

The project was first launched in December 2018 at James Town in Accra, with its positive impact leading to intense lobbying by political, religious and traditional authorities to have the project replicated in their communities.

Tags: general news, La, Rebecca's “Because I Want To Be” Goes to Teshie
Share this article:
Previous Post