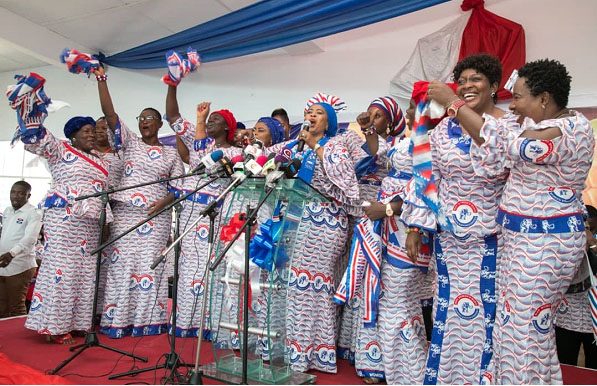 Over the weekend, the national women’s conference of the governing New Patriotic Party (NPP), the first of its kind in the party’s history, took place at the Western regional capital of Takoradi.

The signature red, white and blue colours painted the oil city. The conference was attended by all 275 constituency and 16 regional women organisers of the party, their deputies, all female party executives at all levels, women groups, including female Members of Parliament (MPs), renowned female clergies and apolitical women groups. Others were women metropolitan, municipal and district chief executives (MMDCEs), female political appointees from the governing party, female volunteer groups, among others.

Volunteer ladies’ groups such as Loyal Ladies, Staunch Queens and Women’s Wing Maidens drunk from the same cup, working together to make the conference successful.

The three-day all-women’s programme, which was apparently taken over by men, was meant to whip up the political enthusiasm of the women in the party and more importantly, get them actively involved in the party’s organisation ahead of the 2020 electioneering period.

According to the national women organiser, Madam Kate Gyamfua, the conference was to “serve as an avenue for the network of ideas and campaign strategy in the run-up to the general elections in 2020.”

Both first and second ladies, Rebecca Akufo-Addo and Hajia Samira Bawumia, respectively, graced the occasion as the special guests of honour.

Ahead of the conference, the national women organiser went on a media tour to whip up interest of party members, supporters and all those who would be interested in attending the conference. Her social media team, led by the ever hardworking Seth Nana Boampong, flooded all social media platforms with flyers, short videos and pictures to stimulate people’s appetite.

As a true leader, who takes the lead, Madam Gyamfua proved that a good leader did not boss around neither did she sit for others to do the work without her direct involvement.

Believing in the principle of leadership, as one who assigns duties, supervises and gets herself involved in getting the job done, with the strong conviction that result is the ultimate speaker of a leader’s work, she was seen in Takoradi several days before the programme. She sometimes worked deep into the night in ensuring the successful execution of the programme. It is therefore not surprising that the programme recorded one of the highest numbers any single wing within a political grouping can pull in the country.

As the national women organiser, Madam Gyamfua has, on several platforms, expressed the unwavering commitment of her outfit to galvanizing not only the women in the NPP, but also the women of Ghana in general, to vigorously campaign for and vote overwhelmingly for the governing party in the elections of 2020 and beyond. And to her, this is a solemn pledge that must be fulfilled through all legal means possible.

A lot of hard work, thinking, dedication, resilience, among others, went into the planning and preparation for the programme, hence its huge success.

I must say kudos to the 13-member committee who helped the national women organiser in making the dream a reality.

When some of us started advocating for Madam Gyamfua to be elected as the party’s women’s leader, we believed in her capabilities. We trusted that she will deliver and yes, it appears our expectation of her was far less than what she could offer. As the adage goes, the taste of the pudding is in the eating. Her takeover of the women’s wing has rebranded and gingered the base of the women’s wing, making it the beautiful new maiden of the village who catches the eyes of all men, young and old.

Madam Gyamfua also undertook a regional tour to all the newly created regions where she interacted with both party members and non-party members alike. This was aimed at mobilising and inaugurating women groups in these new regions.

Early this year, she came up with the national women’s wing “All Women Day of Prayer and Thanksgiving”, where members of the party met at the Legon Botanical Garden to thank God for the many successes chalked by the party since forming government and to seek God’s favour for President Nana Addo Dankwa Akufo-Addo and the government.

She then started with market visitations and visited some key market centres in the country to educate the market women on the achievements of the NPP government.

Following the market centre visitations, Madam Gyamfua again embarked on a nationwide tour to meet with constituency and regional women organisers of the party. She used the opportunity to address some of the challenges facing the women’s wing in the various constituencies and to ginger them up for the hard work ahead of the party.

She later visited some international women’s wing branches of the party with some of her regional women organisers. Notable among the places she visited were the United Kingdom and Germany, where she sought to educate the party’s diaspora women’s wing on the achievement of the party.
She then met with all female volunteer groups in the party, to get them to synergise in helping the party secure resounding victory in 2020.

One cannot be judged with a single test. Passing the national women’s conference test alone, though a huge achievement; could not have been used to judge her good works.

She has a strong understanding of what recent day political mobilisation is and this seems to be working perfectly in her favour in the way she conducts herself.

Indeed, the Kate Gyamfua factor is changing the face of political parties’ mobilisation in the country.

It Is Humbling To Join Media General - AJ Poundz