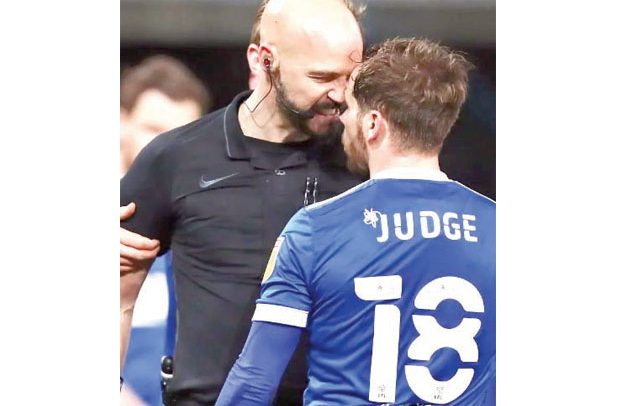 Referee Darren Drysdale has been charged by the FA with improper conduct after squaring up to Ipswich Town’s Alan Judge during the Blues’ match with Northampton on Tuesday.

The 49-year-old clashed with the Irish midfielder, Judge, after his appeal for a penalty was rejected during the Blues’ League One tie with Northampton. The pair had to be broken up by two Ipswich players and Northampton’s Lloyd Jones.

Drysdale faced a grilling from refereeing governing body, PGMOL, on Wednesday and was later charged by the FA with improper conduct. He also issued an apology.

Drysdale’s joint-statement with the PGMOL said, “I fully understand that it is important for us as referees to maintain our composure throughout the game and always engage with players in a professional manner.

“I am sorry that I did not do that last night (Tuesday) and I can only apologize to Alan and Ipswich Town.”

Judge also took to Twitter on Wednesday night to outline his disagreement with the prospect of Drysdale facing disciplinary action.

“There was no need for an apology,” Judge tweeted. “I wasn’t looking for one or looking for any action to be taken. In football, as everybody knows, stuff happens in the heat of the moment in a game. We all make mistakes and for me that is the end of this,” he added.

But an FA statement on Wednesday evening said, “Darren Drysdale has been charged with a breach of FA Rule E3 following Tuesday night’s EFL League One game between Ipswich Town FC and Northampton Town FC.”