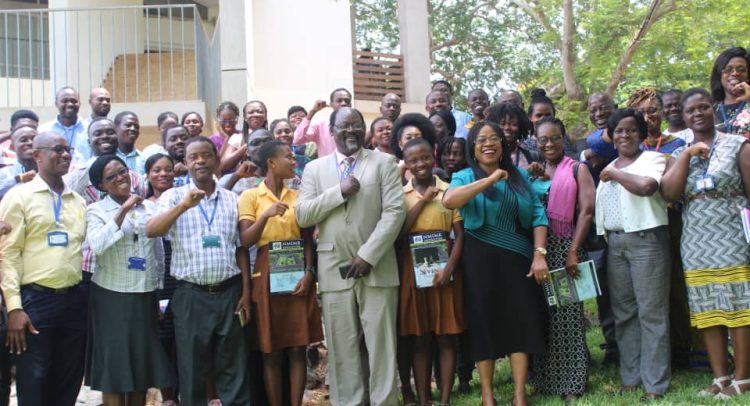 Prof. Abraham Kwabena Anang (fifth from left) and Dr Charity Ninja (fourth from right) with participants at the NMIMR

The Noguchi Memorial Institute for Medical Research (NMIMR) has begun investigations into a possible vaccine that will prevent malaria parasites from developing into a stage that can cause malaria.

Prof. Abraham Kwabena Anang, Director of the NMIMR, who spoke with DGN Online on the sidelines of the World Malaria Day tour of the facility organised by African Media and Malaria Research Network (AMMREN), explained that for a malaria parasite to be infective, it must develop to the stage called gametocides.

“Gametocides is actually the sexual stage of the parasite which is the stage that the mosquito becomes infective and when it bites a person and it is released into the blood, it can develop into malaria,” he explained.

Prof. Anang, therefore, indicated that the said research is looking at how to stop the mosquito parasite from developing into the gametocide stage.

“One of the researches we are doing is studying the mosquito and analysing the gametocides, breaking it into small stages, looking at the antigens and how it will react to other antigens.

We are doing all that to identify certain components of gametocide that can be used for vaccine development that would stop people who are infected with malaria parasite from developing into the gametocide stage,” he stated.

He continued, “So even if the malaria is in an endemic community fewer and fewer people would be able to infect mosquitoes that bite them.

So as the mosquito that bites people are not becoming infected the people who will be infected will also be declining, so through that process we will be able to block transmission from one person to another.”

Prof. Anang pointed out that the research facility has so far identified a lot of antigens, some of which would be vaccine candidates for vaccine development.

“We are taking into consideration its toxicity to look at the immunogenicity and how reactive are they to stimulate the immune system of the human being.

After that we will look at the trials,” he added.

Prof. Anang, earlier in a welcome address, told the journalists that the institute had conducted research into malaria whose recommendations had contributed significantly to influencing government’s position on malaria control and other interventions to reduce the disease burden on the population.

The Executive Director of AMMREN, Dr. Charity Binka, emphasized the need for effective collaboration between scientists and journalists in the fight against malaria.

Dr. Binka called for the need for patients to “take note of the 3Ts (test, treat and track) if they are to get the requisite treatment for malaria and not just go to a pharmacy shop to buy across the counter malaria drug.”