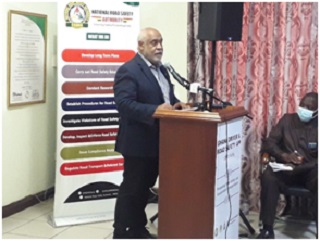 The National Road Safety Authority (NRSA) has underscored the rising level of road fatalities in the country pointing out that about 1,927 such deaths have been recorded between January and August this year.

This represents a 21 per cent increase in fatalities recorded within the same period last year during which 1,588 road deaths were recorded.

The Director General of the NRSA, May Obiri-Yeboah, made this known in an address read on her behalf last Friday at the launch of a new online platform for cautioning road users about road hazards and simultaneously alerting road safety authorities for quick interventions.

The Drifan app, which was designed by the Ghana Driver and Road Safety Foundation (GDRSF), also provides online training sessions on road safety to drivers and other vulnerable road users such as cyclists and pedestrians.

The Director General called for an all-hands-on deck approach to improving road safety, which has been hampered by road traffic casualties.

“These difficulties call for extra creativity and aggression on our part to reverse this disturbing trend, and I am excited about this app as it conforms with the digitisation drive of our nation,” she said.

The NRSA, she said was working to revamp its website to conform with modern demands as well as develop a road safety information centre to address the informational needs of the public.

The United Nations Resident Coordinator, Charles Abani, who launched the app, said that road accidents remained a top security threat in the country as it has claimed more lives than the COVID-19 pandemic.

He emphasised the need to build international partnerships through conventions to share good practices and raise funds towards reducing road accidents by 50 per cent by 2030.

While focusing on doing away with old hazards such as speeding in urban settlements, more attention he noted was needed to deal with new hazards such as the misuse of synthetic drugs and the use of mobile phones.

“We know that one of the reasons why these things (accidents) happen is that people are not paying attention but drugs too could cause people to lose perception of space and time,” he said.

The Director of Partnership and Projects at the Foundation, Freda Frimpong, said that achieving the 2030 target set by the UN to reduce the number of road crashes by half demanded new approaches and innovation to deal with road accidents.

The app, she therefore said, would be a work-in-progress that would have additional functionalities to contribute to sustainable and safe transportation to citizens of the country.