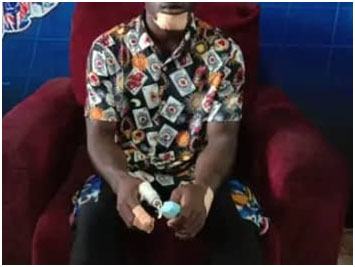 The victim with his wounded parts covered in plaster

THE POLICE in Kwesimintsim near Takoradi are currently on a manhunt for an alleged armed robber who purportedly attacked a taxi driver at Airport Ridge in the Sekondi -Takoradi Metropolis.

The unfortunate incident occurred Monday at about 6pm.

The driver, whose name was given only as Richard, was seriously injured after the assailant inflicted knife wounds on his fingers and around his chin.

Narrating his ordeal, the driver said the alleged robber hired his taxi cab for some errands on that fateful day.

He said “Initially, the guy asked me to take him to Kojokrom near Sekondi but after getting to the destination, the criminal told me to take him back to Airport Ridge near Takoradi.”

He pointed out that this was after the assailant made some phone calls and acted as if he was frustrated.

He added “I obliged and took him back to a location at Airport Ridge where the armed robber claimed to live.”

Upon reaching the place,he said the assailant brought out from his pocket some life-threatening implements including knives and shockers.

He said the robberused the shocker on his (driver’s) body and pointed a knife at him, threatened to kill him and take away the car.

The driver said he decided to save his life and struggled with the assailant and managed to hold the knife, but, the robber pulled the knife and in the process, cut off two of his fingers on the right hand.

The driver continued that he also sustained severe wounds around his chin.

In the course of the struggle, he said the armed robber tried to push him out of the taxi cab and decided to drive the car away.

“Fortunately, the driver drove the 2021 registered Toyota Yaris into a nearby gutter. So the robber had no option than to leave the car and ran away. It was then that some residents living around started trooping to the scene,” he noted.

He indicated that some of the residents rushed him to the hospital where he is currently receiving treatment.

“I feel pains all over my body including my waist. I have also lost my two fingers and sustained some wounds around my chin”.

He said were it not for the people around, he might have lost his life and the vehicle.

The case was reported to the Kwesimintsim District Police Command which has commenced investigations into it.