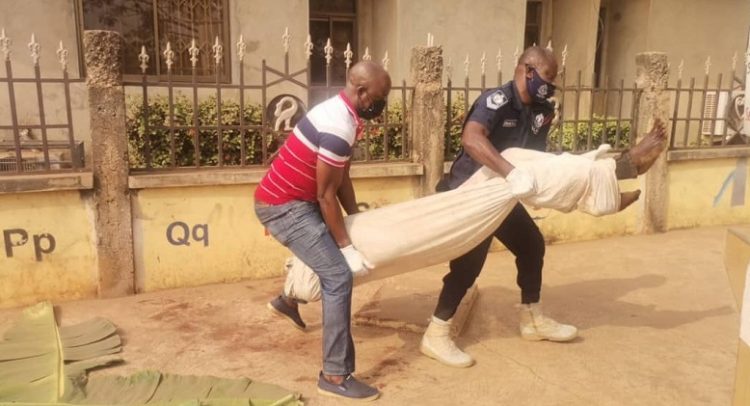 The dead robber being taken to the morgue

A SUSPECTED robber in his early 30s has been lynched after he failed to steal from a vehicle, which was parked at a church premises.

The now deceased hoodlum, according to reports, was trying to forcibly break into the vehicle at Ash Town in Kumasi around 1am on Saturday.

Unfortunately for him, some people spotted his ‘operation’ and subsequently pounced on him and attacked him until he died.

The body of the deceased, whose identity is still unknown, has been deposited at the Komfo Anokye Teaching Hospital mortuary for autopsy.

Throwing more light on the incident, eyewitnesses claimed that the hoodlum sneaked into the church’s premises in the night to steal.

The robber, they disclosed, attempted to forcibly break into a car, parked at the church’s premises but he was spotted by some people, who raised an alarm bringing curious residents to the place.

Within few minutes, a group of angry mob surrounded the robber and gave him some beatings, forcing him to jump into a gutter in front of the church.

Even in the gutter, the blood-thirsty mob, still threw stones and other objects at the robber, who died minutes later. The police are investigating the case.