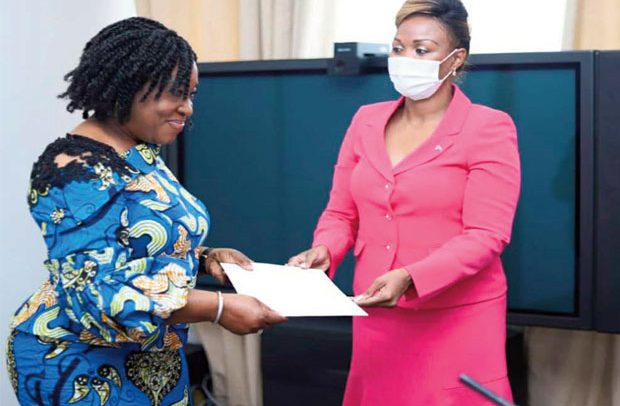 Grace Jeanet Mason presenting her letter to Shirley A. Botchway

Grace Jeanet Mason served as the Deputy Chief of Protocol at the Department of International Relations and Cooperation of South Africa from September 2017 until her appointment as High Commissioner-Designate of South Africa to Ghana.

In a statement after receiving her letters, Ms. Ayorkor Botchway recalled the long-standing historical relations between Ghana and South Africa dating back to the liberation struggle in Africa.

She indicated that the bonds of friendship between the two countries have been underpinned by the shared values of mutual respect, commitment to democracy, good governance, the rule of law and respect for human rights.

The minister said the friendship and cooperation between the two countries, particularly, in recent times, have grown from strength to strength, characterised by several exchanges of high-level visits which have resulted in economic dividends for the two countries.

She recalled that during President Nana Akufo-Addo state visit to South Africa in July 2018, a decision was taken to elevate the bilateral framework and the Permanent Joint Commission for Cooperation (PJCC) between Ghana and South Africa, to a Bi-National Commission.

She also referred to President Akufo-Addo’s visit in December 2018 where he attended the “Global Citizen Festival: Mandela 100”, held under the auspices of the Government of South Africa and the House of Mandela as part of the centenary celebration of President Nelson Rolihlahla Mandela.

The minister mentioned that Ghana has had the pleasure of also receiving Cyril Ramaphosa to Ghana in December 2019, and added that the visit undoubtedly strengthened the already existing good relations and cooperation between Ghana and South Africa.

She noted that the establishment of AfCFTA will create an opportunity for the two countries to boost trade relations.

She expressed the hope that Ms. Mason will work to strengthen the already cordial relations between the two countries during her tenure, assuring her that the Government of Ghana will support her to ensure a successful tour of duty in Ghana.