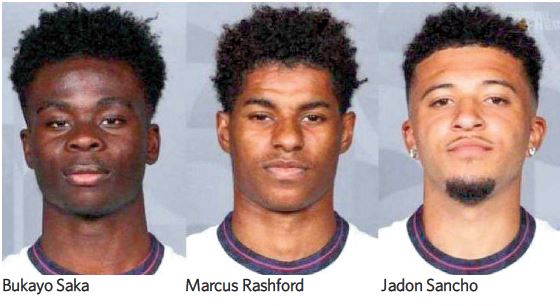 Bukayo Saka has been subjected to racist abuse after he missed the last penalty in England’s heartbreaking Euro 2020 final defeat to Italy.

The 19-year-old Arsenal star came off the bench and took the fifth penalty during their shoot-out defeat to Italy.

Gianluigi Donnarumma saved Saka’s effort, which proved to be the crucial moment as Italy was crowned European Champions.

Sadly, in the immediate aftermath to the game, Saka has suffered sickening racial abuse with several disgusting posts on his Instagram account.

The Arsenal star was targeted with racist language and emojis on the social media website, on his most recent post from the day before the final. One user told him ‘get out of my country’, while another said: ‘Go back to Nigeria’.

In a statement, Instagram said: ‘No one should have to experience racist abuse anywhere, and we don’t want it on Instagram.

‘We quickly removed comments and accounts directing abuse at England’s footballers last night and we’ll continue to take action against those that break our rules.

‘In addition to our work to remove this content, we encourage all players to turn on Hidden Words, a tool which means no one has to see abuse in their comments or DMs.

‘No one thing will fix this challenge overnight, but we’re committed to keeping our community safe from abuse.’

The FA said it was ‘appalled’ by the abuse and would do everything possible to support players affected by racism.

‘We could not be clearer that anyone behind such disgusting behaviour is not welcome in following the team,’ said the FA in a statement.