Savelugu 2020 Parliamentary Election Not Yet Over – Akufo-Addo 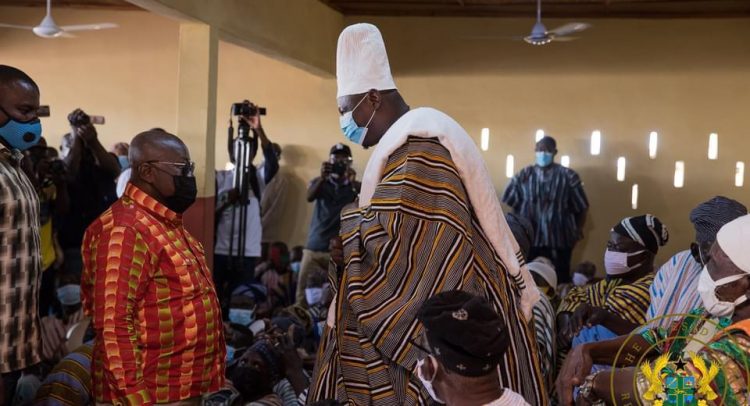 President Akufo-Addo said the New Patriotic Party(NPP) believes in the rule of law and that until the court declares a winner in the 2020 Savelugu constituency parliamentary election the NPP still has a parliamentary candidate.

He made this known when he paid a courtesy call on the Yoo Naa Abdulai Andani during his tour of the Northern region on Saturday, August 7, 2021.

The respondents of the petition are the Electoral Commission( 1st Respondent) and Abdulai Jacob Iddrisu(2nd Respondent) in the case.

The petitioner, Muhamed Abdul-Samed Gunu, is claiming that the purported election of the 2nd respondent as Member of parliament for the Savelugu constituency is invalid, owing to widespread malpractices and irregularities which affected the outcome of the impugned election.

The NPP Savelugu parliamentary candidate said the overarching aspiration of the 1st respondent is to conduct elections that are free, fair and transparent to reflect the will of the people, protect the rights of candidates and inspire confidence in the democratic experiment that the republic has conducted under the fourth Republican Constitution since 1992.

He said the elections were vitiated by gross and widespread electoral malpractices that substantially and materially affected the results of the election as declared by 1st respondent in favour of 2nd respondent.

The petitioner said that there manifested an egregious violation of neutrality, transparency and fairness at the D/A primary polling station at Kadia, which substantially and materially affected the results of the election as declared by 1st respondent in favour of 2nd respondent when 1st respondents officer, a ballot box issuer surreptitiously inserted several already printed ballot sheets, not the situated ballot boxes.

The petitioner says that when valid votes cast at polling stations, where voting was carried out by the law and compliance with the regulations governing the conduct of the 2020 parliamentary elections, are collated, the petitioner herein is the lawful winner of the 2020 parliamentary election for the Savelugu constituency adding that in consequence of the above stated constitutional and statutory violation, infractions, irregularities and malpractices, 1st respondent declared results for the parliamentary elections for over the actual votes validly cast, thereby subverting the sovereign will of the electorate contrary to the preamble and Articles1(1) and 42 of the constitution, 1992.

The NPP parliamentary candidate for the Savelugu constituency prays that the Tamale High Court declares that Abdulai Jacob Iddrisu, 2nd respondent herein and National Democratic Congress(NDC) parliamentary candidate on account of votes that ought to have been validly declared is not the validly elected Member of Parliament for the Savelugu constituency.