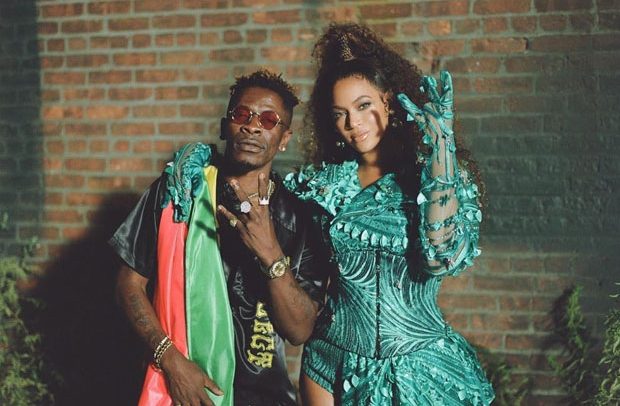 Dancehall artiste, Shatta Wale, has over the weekend, not only won several hearts around the world but also brought honour and world attention to Ghana; courtesy of his latest works with American superstar, Beyoncé Knowles.

The video is part of her much-talked-about music film called Black Is King that serves as a visual companion to the 2019 album, The Lion King: The Gift, a tie-in album curated by Beyoncé for the 2019 remake of The Lion King.

The film was released globally to stream on Disney+ on July 31 and was aired on major media platforms across the world over the weekend.

The video with Shatta Wale was shared severally on different social media platforms in many countries after Beyoncé first shared it on her Instagram.

It did not only showcase Ghana to the world but also presented some elements of black history and African traditions. Some of these were captured in a scene with Beyoncé dancing in different locations, including a dungeon-like space and treetops among others.

Shatta Wale is first seen in the video dancing behind Beyoncé. The next shot shows him sitting on his throne as an African King in the south. He takes over the next verse from Beyoncé and then follows other scenes which show him singing from the back of a horse underneath an umbrella being held by two other characters, depicting a king of the north.

This is perhaps to highlight the diverse cultures in Ghana and Africa as a whole.

Shatta Wale also made Ghana visible in the film displaying the country’s national flag in some scenes with Beyoncé.

Ghana was further showcased by Ghanaian dance group, Dance with Purpose (DWP) Academy, who had also been captured dancing on a street in Accra.

Shortly after the premiere of the video, Shatta Wale took to Twitter to express his appreciation to Beyoncé for believing in his talent.

“Thank you my queen for believing in my talent and giving me a platform to share my good message to the world…God will forever bless you,” he tweeted on Friday.

According to Beyoncé “the events of 2020 have made the film’s vision and message even more relevant, as people across the world embark on a historic journey. We are all in search of safety and light. Many of us want change. I believe that when black people tell our own stories, we can shift the axis of the world and tell our real history of generational wealth and richness of soul that are not told in our history books.”

“With this visual album, I wanted to present elements of black history and African tradition with a modern twist and a universal message, and what it truly meant to find your self-identity and build a legacy,” she revealed on Instagram about the entire project.

“I only hope that from watching, you leave feeling inspired to continue building a legacy that impacts the world in an immeasurable way. I pray that everyone sees the beauty and resilience of our people. This is a story of how the people left most broken have extraordinary gifts,” she added.

She noted that the film was shot in different countries including Ghana, South Africa and USA.

This however sparked speculations that Beyoncé actually visited Ghana for the video.

But Shatta Wale’s manager, Bulldog, denied the claim on TV3, saying “Beyoncé did not come to Ghana. We flew out there to shoot our scene with her.”

Many Ghanaians have since congratulated Shatta Wale on his works with Beyoncé.  This included a long list of showbiz personalities, some of whom are Sarkodie and Stonebwoy.

‘Only A Foolish Old Man Will Marry A Young Lady’