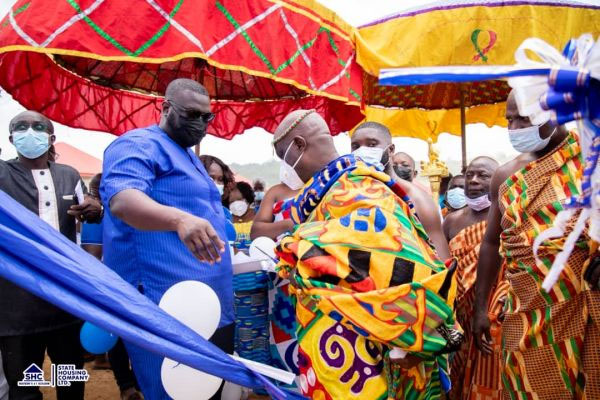 Management of State Housing Company (SHC) has named its new estates in Sefwi Wiawso after Katakyie Kwasi Bumangama II, the Omanhene of the Sefwi Wiawso Traditional Area, in recognition of his exemplary leadership.

The honour is also in recognition of the Omanhene’s role in securing the land for SHC to embark on the phase one of the housing project.

At a colourful ceremony last Tuesday, Mr.Kwabena Ampofo Appiah, Managing Director of SHC, stated that “this is a progressive looking Omanhene who out of his own volition, gifted us the land in anticipation of Sefwi Wiawso becoming a regional capital ahead of the referendum to carve out Western North from Western Region.”

“Whereas some chiefs are helping us as an institution, others are also creating problems for us with all manner of avoidable legal tussles, so we really hold Katakyie in high esteem,” he added.

He assured the people of Sefwi Wiawso that work was ongoing steadily and SHC would continue to employ skilled labourers from within the traditional authority.

“I’m sure most of the carpenters and masons in Sefwi Wiawso have been contracted to work on the project, so it’s a win-win situation for all us,” he said, adding that it is the core mandate of the SHC to provide affordable and decent accommodation to every Ghanaian, an assignment he promised to discharge according to expectation.

In his remarks, Katakyie Kwasi Bumangama II, expressed gratitude for the honour done him by SHC and pledged the support of the traditional authority for a successful completion of the housing project.

“Now Sefwi Wiawso is a regional capital, so we need accommodation, especially for civil and public servants who would be posted here. I’m therefore happy at the progress of work so far,” he observed.

He, however, appealed to management of SHC to “make the houses more affordable.”

The phase one of the project, which aims at constructing 500 houses, is a mixture of two and three bedroom detached houses. So far, 30 houses are at various levels of completion.