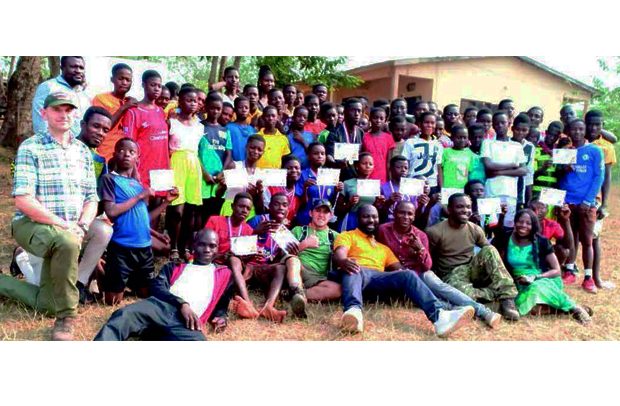 Officials and awardees in a pose

Sir Diagnose International and Dabin Nti International began their 2020 charity tour with a bang at Adaswasi DA JHS in the Eastern Region.

This year’s trip was well received in the region on many reasons; the history of the Sir Diagnose International, the love for education and their generosity.

The two heads of the charities ‒ Pte George Ntiamoah and Pte Daniel Dabin ‒ had arrived from the UK for the tour in the New Year 2020.

Sir Diagnose International, a UK/Ghana-based charity headed by George Ntiamoah, has been in operation in Ghana since 2011.

ln 2018, Pte Daniel Dabin’s visit was based on a new project aimed at providing solar energy in classrooms which birthed the formation of Dabin Nti International Charity.

These two organisations have since been working together, mainly in less advantaged schools in rural areas in Ghana.

Activities which formed part of this year’s charity tour included a special sports challenge called tiger fit sports which equipped the schoolchildren to promote teamwork, passion for sports and the will to succeed.

A special guest and sports team captain, Chilli Tupa, from the British Army was present to lead the new tiger fit sport completion.

Natalie Green and Samuel Bediako from East London Hackney were also guests who talked to the kids about hard work and discipline.

At the end of the competition, the top three teams were awarded various prizes, including cash, phones, medals and certificates.