So Nigel Gaisie Counts Himself As A Smart Prophet By Using Umuofia – Hahahahahaaa! 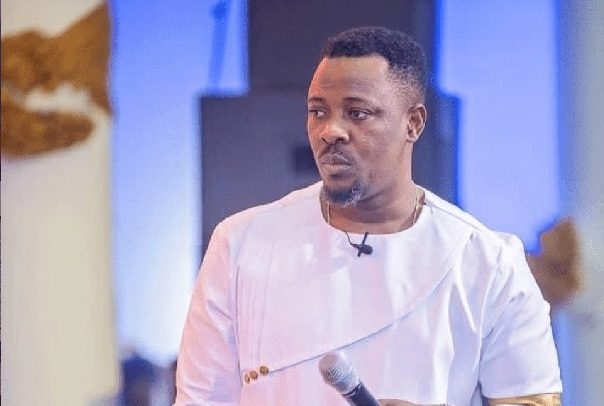 Nigel Gaisie, loudmouth and obstinate as he is, has scurried to take refuge in Umuofia to avoid arrest for breaching a directive by the Inspector General of Police (IGP) to all prophets in Ghana not to embark on their usual frivolous and reckless but alleged prophetic predictions of doom for the coming year about to dawn on humanity and the nation, during their 31st December 2021 watch night services.

Nevertheless, the known and numerously proven quack prophet Nigel Gaisie sought to be smarter by doing the very prohibited act by adopting analogies. He prophesied about events likely to take place in a country in Africa called Umuofia.

Once I heard the name Umuofia mentioned, my mind was cast back to the Nigerian renowned novelist Professor Chinua Achebe’s book titled, “Things fall apart the centre cannot hold”. It is surely in that book that the narratives concerning Obi Okonkwo may have Umofia mentioned if I am not mistaken.

Umuofia, if it does exist at all, could be a town in the Ibo land in Nigeria.

The cowardice of Nigel Gaisie had never been more conspicuous than on Friday, 31st December 2021, at his watch night church service where instead of saying NDC, he turned it into CND and portrayed it to his mostly ignorant, gullible, and brainwashed church members as a political party in Umofia going to win their 2024 general election. However, the party will be denied victory by the country’s current ruling political party.

Is it not this fake womaniser prophet whose numerous prophecies as prophesied never materialised? Is it not this same self-styled prophet who has admitted on television interviews to being extremely fallible when it comes to libidinous arousal hence quickening to take many women to bed? Can such a womaniser be a man of God to tell the secrets from God?

Was it not Nigel Gaisie who had recently been proclaiming in the valleys and on top of the mountains that he would prophesy his alleged “fear and panic false prophecies” on 31st December 2021, despite the IGP’s order to the contrary? Why did he issue a disclaimer, adopt an unknown country (Umuofia) and reverse NDC to CND before revealing his usual nonsensical stories alleged to be revelations to him from God Almighty?

Is he actually serving the God Almighty who is the Creator of all things seen and unseen, or he is serving a different god that reveals falsehoods to him to make him a laughing stock all of the time?

If he were a man as he had been boasting of, he should have said Ghana, NDC, etc., and his arse will be dangling in police cells by now. He is simply a coward, but an expert crook able to fool his church members and his NDC political fans who are obviously shallow-minded persons that eagerly accept all falsehoods thrown at them by Nigel for facts and truth.

How I hope the police would invite him to point out from a world map where that country Umuofia is and their political parties.

If he happens not to be able to explain convincingly the questions to be thrown at him regarding Umuofia, CND, and the rigging of their general election 2024, he must be arrested and prosecuted. He has caused fear and panic to the citizens of that unknown country.

I shall be back to write about the stupidity of certain NDC parliamentarians who were prior to the 31st December 2021 “prophetic watch night church services”, arguing that there are no laws in Ghana to direct prophets about what to say and what not to say. Hence, the IGP has no ground to stand on by his order to the churches not to prophesy any “fear and panic” prophecies as they are noted for.

Nigel Gaisie is just a coward, crook, and a false man of God who has been frightened off by the shadow of IGP Dr. George Dampare to dive for prophetic cover in Umuofia and CND sophisms.

Who says man no dey in Ghana? IGP Dr. Dampare and his police force dey ooo!

All the fake prophets are shaking like leaves come under the intensely blowing harmattan wind! Hahahahahaaa!

Lest I forget, some shallow-minded Ghanaians are saying Nigel Gaisie had correctly prophesied the death of a staff member of the Ghana multimedia. That is absolute trash! If he predicted that there would be an attack on the staff of multimedia in 2021, without specifying the type of attack, whether physical or spiritual, and somebody from the multimedia dies, how can any sensible person attribute that to the precision of Nigel Gaisie’s prophecy?

It is only a mentally-retarded person unfamiliar with biblical prophecies that will take Nigel Gaisie seriously on that conditional prediction, his trademark of course.