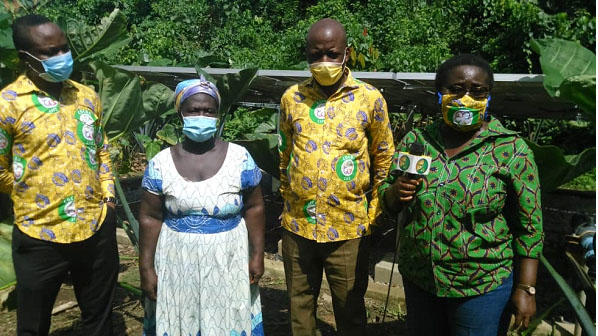 Yaa Peprah Amekudzi (right), some staff of Mondelez and a female cocoa farmer

MONDELEZ INTERNATIONAL, implementers of the Cocoa Life Programme, has introduced a new technology that seeks to help triple the annual yields of cocoa production in Ghana.

The technology, known as Solar Powered Irrigation System, is designed to mitigate the effects of climate change on cocoa farming by supplying consistent water supply throughout the year to over 70,000 cocoa farmers under the Cocoa Life Programme.

It will thus save farmers and also help to triple the country’s annual yield, and farmers will not have to wait for rainfall to determine their annual yields.

Speaking at the launch of the pilot project of the new technology at Otwebediedua in the Eastern Region, Head of the Cocoa Life Programme in Ghana, Yaa Peprah Amekudzi, said the new technology would ensure that cocoa got the required litres of water needed for high yields throughout the year.

Explaining why the new technology was introduced, she said cocoa farmers, over the years, had complained about the erratic and unpredictable rainfall which continued to affect cocoa production in the country.

“As an organization committed to helping cocoa farmers benefit from their work and also ensuring sustainability of cocoa production, we decided to undertake research on how other countries were able to generate enough water supply for their cocoa production,” Mrs. Amekudzi said.

The research, she emphasised, led to the discovery of the solar powered irrigation system which had the capacity to supply over 5000 litres of water hourly depending on its size.

Mrs. Amekudzi said the pilot programme of the irrigation technology would cover 10 farms within the six regions Cocoa Life operated within.

“In all, we operate in 700 communities spread in 18 districts within six regions of Ghana. More than 70,000 cocoa farmers are under the Cocoa Life Programme,” she said.

Mrs. Amekudzi said since the inception of Cocoa Life as a cocoa sustainability program in 2008, Mondelez International had consistently worked with “our partners, particularly cocoa farmers, to make cocoa production more efficient and sustainable.”

She reiterated Mondelez International’s commitment to continue to support cocoa farmers to become businessmen and women and ultimately improve their wellbeing.

Mrs. Amekudzi added that with all the policies that Ghana COCOBOD “is coming out with supported by the private sector and cocoa farmers, Ghana can achieve a million metric tonnes of cocoa annually.”

She said next year, a multimillion dollar factory to process cocoa waste would be opened, adding that “this will further boost the cocoa sector in the country.”

A technical aid and member of the research team at Mondelez International, Edward Kumah, said the introduction of solar irrigation technology would help mitigate the risks associated with climate change.

“When farmers purchase fertilizers and it doesn’t rain, it affects their productivity and ultimately their return on investment,” he said.

Mr. Kumah said cocoa needed about 30 litres of water per day to make it have good yield throughout the year.

The technology has three components— boreholes that serve as the water source, solar power generation and drips to supply the water to the cocoa farms.

A farm owner, Francis Oko Lanquaye, has described the new technology as efficient; indicating that since it was installed, it had tripled his annual cocoa production.

According to him, he used to experience water difficulties due to the climate change which affected his annual yield.

“With this new technology, I do not have to worry about adequate water to supply my cocoa farm,” Mr. Lanquaye said.