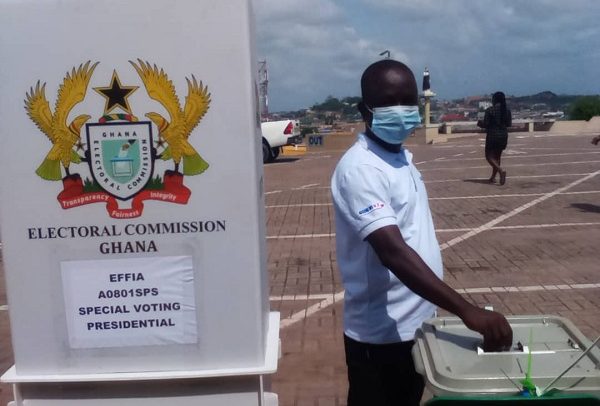 A journalist casting his ballot

The special voting by journalists, security personnel and some workers of the Electoral Commission taking place today in all designated polling stations across the Western Region, ahead of the December 7 general elections, is going on smoothly.

According to the Regional Director of the Electoral Commission, Angelina Tagoe, in all 5,390 voters are taking part in the voting special voting at the 17 designated polling centres

At the Christ the King Parish Hall polling centre in the Effia constituency, 357 voters were expected to cast their ballot and as at 10:13am, 157 of them had voted according to the Presiding Officer, Clement Afranie.

In the Kwesimintsim constituency, the exercise is taking place at the St Anthony of Padua Catholic Church where the Presiding Officer, Charles Kumordji indicated the exercise started at 7 am. He said 413 people were expected to vote and as at 9am, 130 voters had cast their ballot.

The presiding officer mentioned that the process has been smooth and calm with all the necessary logistics available.

In the Sekondi constituency, the special voting exercise took place at the Methodist Park and the total number of voters expected was 808 and as at 7:25am, 89 of them had voted.

At the Police Canteen polling centre ‘A’ in the Takoradi constituency, 402 people were expected to cast their ballot but as at 12:41pm, 222 of them had voted.

According to the Presiding Officer, Listowel Asare, nine people could not find their names in the register and said however that they would be able to vote on December 7.

In the Ahanta West constituency where the exercise took place at the Municipal Assembly Hall polling centre, expected voters were 325. Voting started at 7am and as at 9:40am about 87 had voted.

At all the polling centres visited, all the COVID-19 safety protocols were strictly adhered to and the political party agents of the two major parties—NPP and NDC—were present.