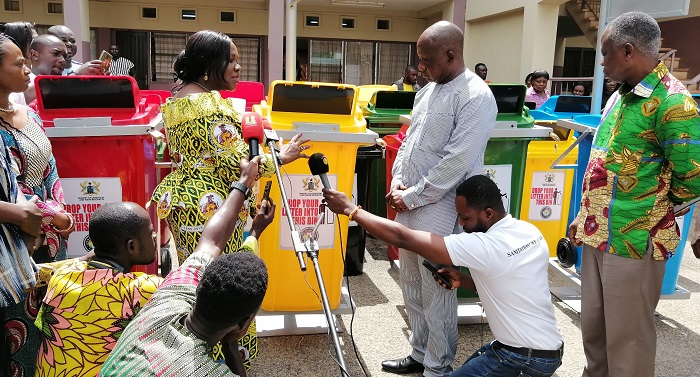 Cecilia Dapaah (left) and Simon Osei-Mensah during the
presentation

People dropping litter, including from vehicles, face on-the-spot fines and other penalties as Government supports Metropolitan Municipal and District Assemblies to tackle littering in their communities.

Minister of Sanitation and Water Resources, Cecilia Abena Dapaah, who gave the hint, said her Ministry would partner Assemblies across the country to use penalties to deal with anti-social behavior by hitting litter louts in the pocket.

Speaking at the presentation of 1,000 litter bins to Assemblies in the Ashanti Region, the Minister stated that collecting litter costs Government several millions of cedis a year, and that the time has come for every citizen to take responsibility for their litters.

Sanitation bye-laws of MMDAs empower them to set on-the spot fines against littering which has become a scourge on the environment, and taxpayers’ money is wasted in cleaning it up, which could be better spent in communities.

Madam Dapaah said a total of 20,000 litter bins will be distributed to all the Assemblies across the 16 regions as part of Government’s wider litter strategy to tackle issues towards saving the environment.

According to her, the litter bins, which are intended to prevent rubbishes from scattering in cities and communities, would help in tackling the issue of waste getting into the marine environment.

The Ashanti Regional Minister, Simon Osei-Mensah, who received the litter bins on behalf of the Assemblies, asserted that the new project will help reduce the amount of litter that often plagues the streets and chokes gutters.

For him, the damaging effects that waste can have on the environment call for other punishments, including sweeping of the streets by litter louts

He said he looked forward to seeing the litter bins helping cities and communities to make a real difference in their areas, adding that law enforcement is the only way out of the present sanitation predicament of the country.