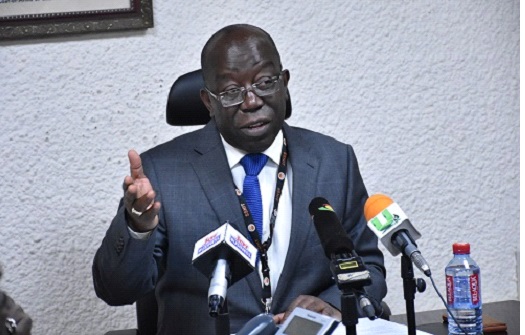 The Social Security and National Insurance Trust (SSNIT) has organised its annual thanksgiving service to appreciate God for His kindness and mercies throughout last year.

The virtual congregation service, held on 12th February, 2021 had SSNIT workers joining from all their offices across the country.

Under the auspices of the SSNIT Christian Fellowship on the theme: “Give thanks unto the Lord; for He is good”, (Nahum 1:7), the service was organised to glorify God for His unwavering faithfulness and to pray for His intervention in the affairs of the Trust this year.

The Director-General of the Trust, Dr. John Ofori-Tenkorang, in a short exhortation focusing on Job 13:15, captioned his message “triumph in the midst of adversity”. He noted that it is imperative to have hope during these challenging times and believe in God.

He indicated that from the days of antiquity, through the middle ages to the modern era, the Lord has always intervened and showed us the way to overcome adversities.

“In the midst of untold adversity, when Job had lost everything, he arose, tore his robes, shaved his head, fell to the ground and said, blessed be the name of the Lord. He maintained his faith and his belief”.

“The Lord did not only restore Job’s fortunes, he restored them in abundance. So, in times of adversity, we should give thanks, praise God and glorify his name”, he said.

Since March 2020, various global activities have been disrupted by the Covid-19 pandemic, which many have described as an adversarial event.

In a sermon delivered by the associate minister of All Nations Christian Centre in Accra, Rev. Eric Fordwuo, he said that it has gotten to a point where people have to move from thanksgiving to thanksliving, stressing that the former is an act, whereas the latter is a culture that is developed.

He entreated staff and Management of the Trust to be thankful and appreciate God, regardless of any situation that may arise.
Speaking in an interview after the service, the President of the SSNIT Christian Fellowship, Mr. Michael Abeeku Adjei noted that the act of thanksgiving grows the faith of Christians and also recognises the role of God in one’s life.

“We do believe that whatever happens has an element of spirituality. There is an unseen hand that controls whatever happens. As an institution, it is important to thank God and appreciate Him in whatever we do”, he said.

The SSNIT annual thanksgiving service has been instituted for more than 10 years.