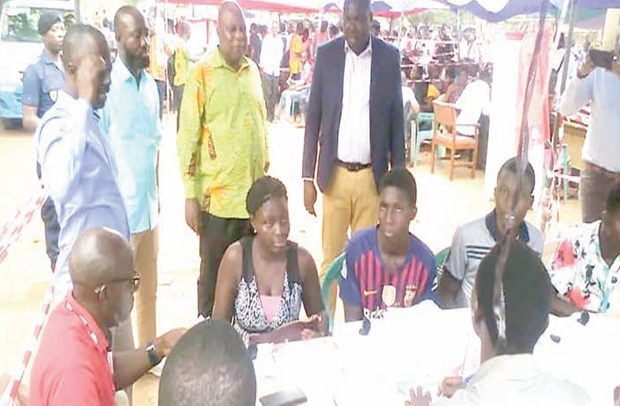 The ongoing Limited Voters’ Registration at Asokore Mampong, in the Ashanti Region was marred by protests last Thursday afternoon when some officials of the opposition National Democratic Congress (NDC) decided to prevent some free Senior High School (SHS) students from registering.

This ‘weird’ decision by the NDC members nearly resulted in a free-for-all fight between the NDC and the ruling New Patriotic Party (NPP) officials.

The near-fracas, reportedly, sparked tension and confusion at the registration center so the hitherto-peaceful exercise was brought to a halt for some hours.

A joint military/police team was called in by the Electoral Commission (EC) officials and that prevented possible violence.

Musah Moro, an eye witness, said the registration exercise was going on smoothly until some students, who were in uniform came to the centre to also register.

He said the EC officials decided to create a different table for the students to register and return to school but this infuriated the NDC members, who oppose the decision.

“It was suggested that the students should be allowed to register quickly so they could return to class but this good suggestion was rejected by the NDC members. Perhaps the NDC officials had the notion that the students, who are beneficiaries of the free SHS policy, would vote for the NPP and so they kicked against their registration.”

Other people at the scene said they didn’t know as to whether the students have offended the NDC in anyway.

After the incident, Yakubu Tony Aidoo, the Asawase Constituency NDC Communications Officer, said on Nhyira FM in Kumasi that “we shall fight again.”

He claimed that the NPP members bused students from other constituencies to register at Asawase to enable them (NPP) to snatch the Asawase seat in 2020, saying “What the NPP tried to do was illegal and that is why we decided to prevent the students from registering”, Yakubu Tony Aidoo, who sounded angry, said.

Rashid Dauda, the Asawase Constituency NPP Organizer, speaking on the same network, lambasted the NDC officials for always trying to cause trouble.

He said “the NDC opposed the registration of some KUMACA students, because they see them as NPP supporters due to the free SHS policy, introduced by government”.