Tension at UHAS as Students, Lectures Demo over Bad Roads 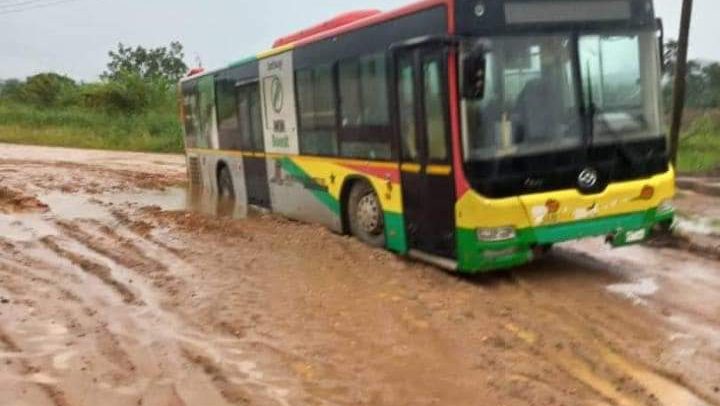 There is uneasy calm at the University of Health and Allied Sciences (UHAS) as students and faculty are planning a massive demonstration against the bad nature of roads and numerous abandoned projects on their various campuses.

Although details of the date and time of the event is unknown, some students and staff of the university who spoke to Daily Guide believe it would be soon. Lecturers have since last Monday, June 7, 2021 started wearing red armbands to register their protest.

This latest development follows several attempts to plead with successive governments from 2011 till date to complete the internal and adjoining roads of the university’s main campus at Sokode near Ho. Prior to this, there had been social media protests dubbed #FixUHASRoads. 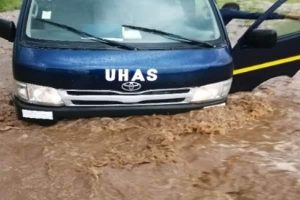 What had broken the camel’s back is the after effects of a recent downpour that virtually cut-off the main campus of the university from Ho and Sokode. Several vehicles, including the long Metro Mass Transit (MMT) Vehicles, buses, taxis and tricycles got stuck on the muddy and flooded road leaving students and staff stranded. Most of them had to walk through the flood and mud to access the campus. For the students and staff, the road can just be described as a death trap.

Felix Apaloo, the SRC President who is a fifth-year medical student described the situation as “terrible. He added that “It is a nightmare for students. It is a death trap. Going to the main campus and back is now a life and death situation. Three of our students have had accidents on that road since last year.”

Dr. Reuben Ayivor-Djanie who is the UHAS Branch President of the University Teachers Association of Ghana (UTAG) corroborated the situation, said commercial vehicles have stopped plying the route. MMT buses which had been shuttling the students have all broken down except two.

To this end, students have no option but to cram themselves in the buses against COVID-19 protocols. This is after the MMT increased the fare per trip from Ghc1.00 to Ghc2.00 due to high cost of maintenance.

Apart from that students are usually late for lectures. Staff and management also spend huge sums of money on vehicle maintenance every month due to the bad nature of the rods.

When the late President Attah Mills cut the sod in 2011 to commence the construction of the main Campus of UHAS, he noted that the project was being funded mainly by a Chinese grant with counterpart funding from Ghana.

Apart from that, Ghana had the obligation to construct the road from the Main Accra – Ho Highway through UHAS to join the Ho Airport road, along the Ho – Aflao Highway. The government was also obliged to construct the internal roads of the campus and provide access to water and electricity.

Although much work had been done with regards to access to water and electricity, the internal roads and the by-pass roads have been abandoned.

One Road, Five Sod-Cutting, No Show

There have been more than five sod cutting on the UHAS roads since 2011. USSUYA was first contracted to work on the project in 2011. However, it emerged no formal contract was signed.

In 2013 after John Mahama had taken over as President, he cut a sod for the roads to be constructed by the same company, yet after the grading and clearing of the land, no money was paid to the contracted. The road was abandoned again till 2015 when First Sky Group was brought on board.

At the time USSUYA Ghana Limited was responsible for the 17km internal and ring roads of the university. The project which was to last 12 months saw no real work apart from clearing.

While First Sky was tasked with the dual carriage by pass from the Ho-Sokode highway that will intersect a portion of the internal roads and exit at the Ho-Aflao highway near, the Ho Teaching Hospital and the Airport.

After inspection and another sod cutting, First Sky started well, cleared the road nicely to make it accessible by students and staff. However, it was abandoned shortly after the 2016 election due to lack of funds.

In 2017 when the Public Interest and Accountability Committee (PIAC) inspected the projects, it emerged that about GH¢1, 182,177.00 has been taken from the oil revenue in addition to GH¢9,255, 245.76 disbursed for the project, yet there was little to show for the project. Apparently, the money paid was in respect to arrears owed the contractors for previous work done.

In 2020, President Akufo-Addo cut another sod for the same projects and till date no work has been done. The contractors are still complaining of the same problem of ‘no payment.’

Work to Start by the End of Month

The Volta Regional Minister, Dr. Archibald Yao Letsa who has been blamed for doing a poor job on lobbying to get the roads fixed have assured that government is very much aware of the situation. He promised on various local radio stations that the contractor is mobilising to return to site by the end of the month.

If Our Values Are Bad, There Is No Nation To Be Fixed – Presby Moderator