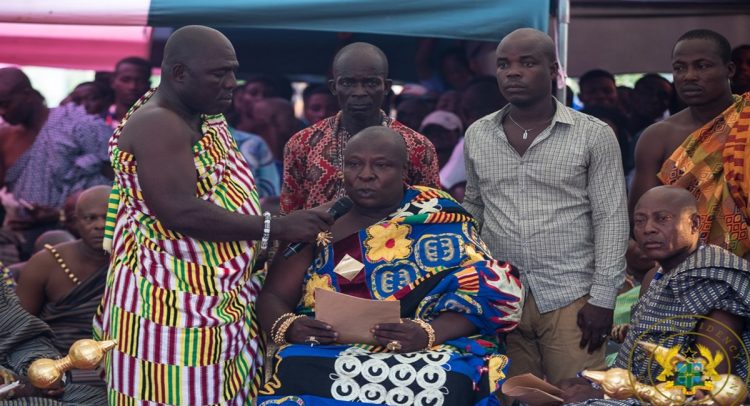 The Paramount Chief of the Aflao Traditional Area, Togbui Amenya Fiti V, has applauded the President of the Republic, Nana Addo Dankwa Akufo-Addo, for the work he has done turning around the fortunes of the Ghanaian economy since assuming office in January 2017.

Thanking President Akufo-Addo for “taking time off your busy schedule to visit us”, Togbui Fiti V stated that “we equally take this opportunity to congratulate you for your tremendous effort in turning around the ailing economy of our country, since assuming office some 2 and a half years ago. Thank you, Mr President”.

The Paramount Chief of Aflao made this known on Monday, 4th November, 2019, when President Akufo-Addo visited Aflao, as part of his 2-day tour of the Volta Region.

Congratulating the President for “doing everything humanly possible for our brothers and sisters in Dagbon to have peace”, he indicated that it “is something that many tried but failed, but you have been able to do that. We congratulate you Mr. President. Thank you very much.”

He also thanked President Akufo-Addo for granting the people of Aflao Traditional Area, a traditional council, and appealed for same to be accorded “my brothers and sisters in Glikor”.

Whilst expressing his appreciation for the President’s effort is “facilitating the 24-hour opening of the Ghana main border at Aflao, which was closed since 1986”, Tobgui Fiti V appealed to the President to bring his influence to bear in helping to resolve the impasse that has resulted in the closure of the Nigeria/Benin border.

With Nigeria indicating that her border will remain closed until 31st January, 2020, the Paramount Chief of Aflao stated that “no, I want the ECOWAS protocol to be observed. The ECOWAS protocol of free movement of human beings and services should be observed. I know you can do it, and we are counting on you to do that.”

“Your Excellency, the Chiefs and people of Ketu South municipality are also grateful to you, and wish to say a big thank you to you for your introduction of the Free SHS policy, which brought relief to many parents who could not have afforded to pay their wards school fees, hence allowing poor homes to acquire secondary education,” he said.

The Aflao Chief continued, “With the Free SHS policy, Your Excellency, you have left a legacy, an indelible mark, to the mind of all Ghanaians and future generations. Your Excellency, it is often said that, when a leopard dies, it leaves its skin but when a man dies, he leaves his name. As our independence is linked to the Big Six, so will your name be remembered in the history of Ghana.”

Togbui Fiti also recounted his visit to Milan to participate in the Chiefs Global Forum of Innovative’s Forum “to defend an Agriculture project from one of the countries in Africa”, he noted how he presented the programme for Planting for Food and Jobs, for which “your flagship project stood very tall in Milan.”

He also thanked the President for “the projects that you have commissioned already that is the new Fire Service station and the new Police Divisional Headquarters. As a border community, Ketu South municipality deserves this facility and we thank you very much for doing a great job today”.

Tags: general news, Thank You For Turning Around The Ailing Economy You Inherited – Togbui Fiti To Akufo-Addo
Share this article:
Previous Post