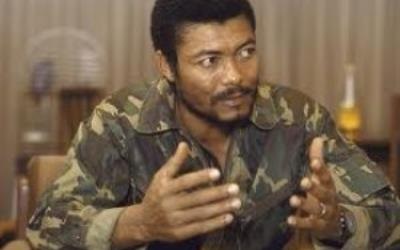 Officers’ Mess… he joined the normal queue at

7am and awaited his turn. When asked about this,

Rawlings bought some bread to eat with cold water

instead of going to the V.I.P. lounge to demand

asked: ‘Brother Jerry, can I have some of your bread?’

Rawlings replied: ‘sure, and pass it on to others – if

anyone wants to eat’, he said…”

JERRY JOHN RAWLINGS and KWADWO BOAKYE-GYAN must have been very close pals before. That must have been forty or so years ago. Jerry was arrested and was being tried for mutiny on 15th May 1979. He was in the BNI cells when a group of young soldiers led by Boakye-Gyan stormed the place and got J.J. out. That is the story sold to Ghanaians. They constituted themselves as ‘Armed Forces Revolutionary Council’ (AFRC), executed General Kutu Acheampong, Colonel Utuka, Lt. General Akwasi Amankwaa Afrifa, Lt. Gen. Fred Akuffo. Commander Joy Amedume, Brigadier Robert Kotei, Colonel Roger Felli, and Air Vice Marshall George Yaw Boakye without trial (extra-judiciously). There were several extra-judicial executions of civilians, abductions, torture, disappearances, illegal seizure of property, stripping and whipping of civilian women and men (even in the groins) for engaging in illegal business, ‘hoarding’ of ‘essential commodities’, including empty beer bottles, … Curfews were from 6pm to 6am, and that gave the perpetrators of the three-month junta the fillip to unleash the most venomous, sadistic cruelties, unprecedented in the history of Ghana on innocent Ghanaians. Few strident voices from among the student-population wormed their way into the National Union of Ghana Students (NUGS) and got the student-body to proclaim: “Let the blood flow.” It was socialist rhetoric all the way: “A revolution is not a tea-party.” “The only antidote to mental suffering is physical pain”; “The end may justify the means as long as there is something that justifies the end”; “Working men of all countries, unite.”

Then… there was a hush-hush election and the People’s National Party led by Dr. Hilla Limann won. Boakye-Gyan swallowed the bait, and took a handsome cash hand-shake and left the shores of Ghana. Rawlings shrugged off all enticements, and remained in Ghana. In the wee hours of 31st December 1981, he struck again. The brutalities and untold hardship, burning bushes, closure of the country’s borders are stories, mostly gruesome, and people who experienced them, including families of murdered judges want to say, “Never again”. So, Ghanaians welcomed Kufuor’s National Reconciliation Commission which was established in 2001. Chaired by Justice K. E. Amuah- Sekyi supported by nine commissioners, the Commission listened to stories of killings, torture, disappearances, detentions, abductions, illegal seizure and confiscation of property. There were apologies, memorials as well as monetary compensation. We thought this would end the bickering. Forget the atrocities of June 4 and 31st December, and move on!

J.J. basks in the appellations: “Man of the People”; “Junior Jesus”. Every year, he will address “cadres” despite the cancellation of June 4 as a national holiday. Boakye Gyan appeared to extol the principle: “Speech is silvern; silence is golden.” Perhaps, till Rawlings spoke thus: “I have given cover to a number of uniformed personnel who were not brave enough for June 4, December 31st and others. There you are, repeating some of the manufactured 40-year-old lies about Boakye-Gyan leading soldiers to rescue me. Let me assure you, that guy never led any soldier to rescue any goat anywhere.” It must have gored the “saviour” Boakye-Gyan.

Boakye-Gyan chose to talk to Adakabre Frimpong on Neat 100.9FM. Boakye-Gyan predicts a bitter end for Rawlings, but he prays for him to die peacefully. He accuses Rawlings of having had a hand in the death of Kojo Lee, with his legs tied with blocks and his body put in a helicopter and dropped in the ocean. His own position followed the bicephalous executive of which Rawlings was the ceremonial head of state and Boakye-Gyan was the head of government. Boakye-Gyan confirms the allegation that Rawlings failed the promotion exams on five occasions, but, as Chief Examiner, he massaged his marks on the fifth attempt to get Rawlings through. Rawlings is imbued by a feeling of jealousy and hatred for anyone who is above him. Rawlings must be the wealthiest Ghanaian, after hobnobbing with Arab leaders and Boakye-Gyan further accuses Rawlings of not knowing his father. When he went to Scotland to look for someone whom he thought was his father, the man locked the door against him. Rawlings is a tribalist, says Boakye-Gyan. He never attacks any prominent Ewe, including Gbedemah and Kojo Tsikata; he is rather always attacking people of other tribes. Why should Boakye-Gyan say this? Is Rawlings’s wife not an Asante? Pitting Ewes against other tribes. Sorry, that will not click.

The French journalist, Jacques Mallet du Pan, noted in 1793, “À l’example de Saturne, la revolution devore ses enfants”, meaning: “Like Saturn, the revolution devours its children.” So, it may not be surprising that the two top soldiers during the June 4th 1979 revolution should be spewing tantrums at each other. A trotro which used to ply the Osu route had the inscription: “If thief thief thief, God laughs.” The owner of the vehicle had no time to write “good English” thus: “When a thief steals from another thief, it amuses God.”

Boakye-Gyan’s story is far from what our books tell us: the history of June 4th is associated more with Rawlings than Boakye-Gyan. Going by his own dictum: “Either you kill or get killed”, he must accept his kismet, and not resurrect what Ghanaians wish to forget. After the tremendous work done by the National Reconciliation Commission, Ghana has to move on. We do not desire anybody would rock the boat, and plunge us into vendetta – retaliatory violence, especially a blood feud in which the family of a murdered person seeks to avenge the murder by killing the slayer or some of the slayer’s family members. It used to be common among the Berbers of Morocco, and also in Corsica and other parts of Italy where the social code required retaliatory vengeance. In Greece, the “maniet” vendetta is considered the most brutal. The “mafia” in Italy and other parts of the world have their origin in these blood feuds. Leontiy Lyule writes about vendetta in the Caucasus: “… the blood feud is more like an obligation imposed by the public opinion.” You may not feel comfortable in Dublin, Ireland where criminal gang feuds pervade. The Mosaic Law (lex talionis) was: “… take life for life, eye for eye, tooth for tooth, hand for hand, foot for foot, burn for burn, wound for wound, bruise for bruise.” Is this applicable now

Rwanda’s history is there for all Africans to read. After the brutal civil war that lasted between October 1990 and July 1994, with the death of Juvenal Habyarimana, a Hutu, we now have a Tutsi President, Paul Kagame, and the country is now a cynosure of greatness in Africa. Any need to insist on copying from Rwanda of 2020?