The ‘Unprecedented Road Network’ Built By The NDC 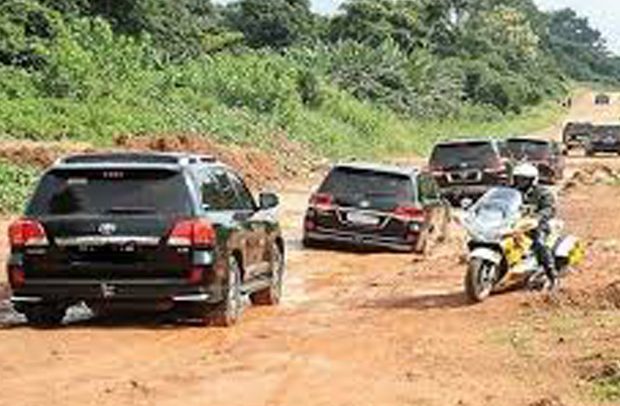 Anytime I watch the various TV stations, particularly Joy News, and I see documentaries about the bad nature of our roads, I giggle.  And anytime I see communities demonstrating against the deplorable nature of their roads, I ask myself, “why now?”

I had cause to write about the highways built by Mr. Rawlings and Kufuor when they held the reins of power like Kumasi to Yeji, Kumasi to Kintampo, Takoradi to Elubo, Accra to Kumasi, Kumasi to Kintampo, Kintampo to Bolgatanga, the N1 highway in Accra,  Wenchi to Banda Ahenkro, Wenchi to Nsawkaw, etc and wondered why the late Mills and Mahama could not continue with the good works by these two former heads of state but rather chose to toot their phantom ‘unprecedented road networks’ in their Green Book.

When the queen mother of Pokuase was interviewed by the media, she said she had been the queen mother for the past nine years and I asked myself, “What was she doing as a queen mother all this while for the eight years that the NDC under John Dramani Mahama was in power?” The truth is that the people have come to realise that the NPP government, led by President Nana Akufo-Addo, is a listening government and will surely listen to their cry and come to their rescue.  This is not a ‘Yentie Obiaa’ government.

Recently when the president decided to visit the six newly created regions, the chiefs in these regions complained bitterly about the deplorable nature of their roads and appealed to Nana Addo to come to their aid.  When Nana Addo returned to Accra, he asked this rhetorical question, “But where are the unprecedented road networks that Mr. Mahama has been telling Ghanaians that he constructed?”

During the 2016 electioneering campaign, the NDC used a trick which nearly worked in their favour.  When they went to the Brong-Ahafo Region to campaign, they talked about good roads built in other regions and when they went to such regions, they talked about good roads built in the Brong-Ahafo Region.  It never dawn on them that no matter how hard you try to submerge a cork under water, it will surely pop up.  Today, the cat is out of the bag and the NDC has been put into shame.  But do they know shame at all?

Somebody out there should ask Mr. Mahama to tell us any highway that he and the late Prof. Mills built in the eight years that the NDC was in power.  If Mr. Mahama is not able to mention one, please ask him why he could not construct roads in the rural areas with all the loans that they contracted?  The guy is a total failure and yet there he is trying to stage a comeback as if Ghanaians are forgetful as he told us in our lean faces. The truth is that Ghanaians can read between the lines, but it is also the fact that Ghanaians possess the patience of the future.  They bided their time and when the right time came knocking on their doors, they shown John Mahama and his corrupt NDC the gate out.

Anytime I see the NDC apparatchiks jubilating whenever people demonstrate against the bad nature of their roads, I begin to wonder whether they are reasonable beings at all.  For eight years, your party held the reins of power and could not fix these roads and when residents are demonstrating against the bad nature of their roads, you think they are demonstrating against the Nana Addo-led government?  In fact, these residents are trying to tell the NDC that they failed as far as the construction of their roads are concerned.  Instead of blaming the TV stations which continue to cover the bad nature of the road networks in various communities, they are foolishly praising the TV stations for exposing the lies they told Ghanaians when they were in power.  In fact, they are quick to complain about the Dome-Kwabenya roads even when Adwoa Sarfo is fixing the roads. I saw a staunch supporter of the NDC clad in all red attire and insulting the president for neglecting the Pokuase road.  Meanwhile, he was standing near the overhead bridge being constructed by the NPP administration. He made a fool of himself because even the Primary Six pupil knows that the construction of the overhead bridge will ease the usual traffic jam in the area.

Another area which Joy News and the rest have done a yeoman’s job by exposing the lies of the NDC is access to potable water in some parts of this country.  When guinea worms disease broke out in this country, particularly in the Northern Region, Mr. Rawlings made sure thousands of boreholes were sunk in the region to save the people from contracting the disease. Ex-President Kufuor continued with the good work of Rawlings and today, the issue of guinea worm is a thing of the past.  The NDC under John Mahama could not continue and left behind communities drinking polluted water in this 21st Century.  The people of Adaklu in the Volta Region and other areas are crying for potable water.  Meanwhile, their Member of Parliament, an NDC man, has been in Parliament all this while but never complained of the type of water his people drink back home because anytime he visited there, he went along with boxes of bottled water.

All the documentaries being shown on the screens of our TV stations should be a lesson to the MMDCEs who control these areas. The time has come for them to prioritise development projects. Water is life and so instead of building toilets, they should build boreholes.  The MMDCEs should also acquire graders to fix the bad roads in their areas of jurisdictions to assuage the suffering of the poor folks in the villages.  During the 2016 electioneering campaign, the NDC erected huge and expensive billboards throughout the country depicting the Kwame Nkrumah Interchange but that did not convince the people because it did not matter to them. That was why the NDC lost the 2016 miserably. They have started losing again because their communicators are only talking about the Ridge Hospital, the Legon Hospital, the Kasoa Interchange, all in Accra, where my old lady has never visited before throughout her ninety-one years on this place called Earth.  And you know what?  At her age, she makes sure she wakes up at dawn on every election day to join the queue to vote.

Since these MMDCEs are representatives of the President in their various areas of jurisdictions, they should work beyond human endurance to make the dream of pushing this nation forward instead of engaging in populist projects which does not benefit the greater majority of the people.  Take the issue of ‘planting for food and jobs’, for example.  We have saboteurs out there who sell the product far and above the subsidised prize but the MMDCEs look on unconcerned.  The President and the Minister of Agriculture have warned these criminals that they would be dealt with severely when caught.  But the question is; should the president be the one to arrest them when he has his appointees manning the districts? This is a question only the MMDCES can answer.  Not me, your humble but irrepressible Earth Angel Gabriel.