Two Arrested With Weapons In Tamale 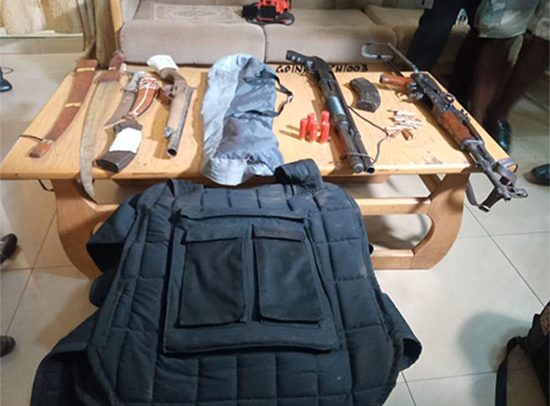 Weapons intercepted by the police

Two suspects are in the grips of the Northern Regional Police Command for allegedly possessing firearms without authority in Tamale, the Northern region.

He added that the team were responding to a Chieftaincy crisis at Bagliga Dakpemyili a village near Tamale when they arrested the suspects.

According to him, the suspects Andani Yakubu Wahid, 30 and Alhaji Abdul Salam Sobo (age not disclosed) were arrested with one AK47 assault rifle loaded with 15 rounds of ammunition, a pump-action gun loaded with 5 carriages and a bulletproof vest at Bagliga Dakpemyili.

“The two suspects were intercepted in a Hyundai Santa 4×4 car with registration number GW 3225-16 at the village and arrested. A search conducted in the vehicle revealed a bag containing the exhibits. Police preliminary investigations revealed that the suspects were recruited by one Yapalsi Naa of Vittin Alhaji Aminu Ayuba to escort a newly installed chief from Banvum/Tamale to the village.”

“Yapalsi Naa of Vittin Alhaji Aminu Ayuba was identified as the lead person who organized the young men to forcefully escort the chief to the community and to deal with any resistance that might happen.”

DCOP Atibilla disclosed that the two suspects laid ambush with weapons on the only road leading to the village to attack opponents of the Chieftaincy divide when the joint police team chanced on them and arrested them.

Northern Regional Deputy Regional Commander stated that the registration of the AK47 rifle has been erased but it is suspected to be police property.

Suspect Andani’s house was searched and an empty AK47 magazine was found in his wardrobe, one local made sword and a jackknife found in his room. The search was extended to his house was closer to the Nyankpala chief palace and one locally-made gun was found.

The suspects Andani Yakubu Wahid and Alhaji Salam Sobo were arraigned before the Tamale District Court today and remanded into police custody to reappear in court on May 31, 2021, while Yapalsi Naa of Vittin Alhaji Aminu Ayuba was granted bail of an amount of Gh 20,000 with one surety.