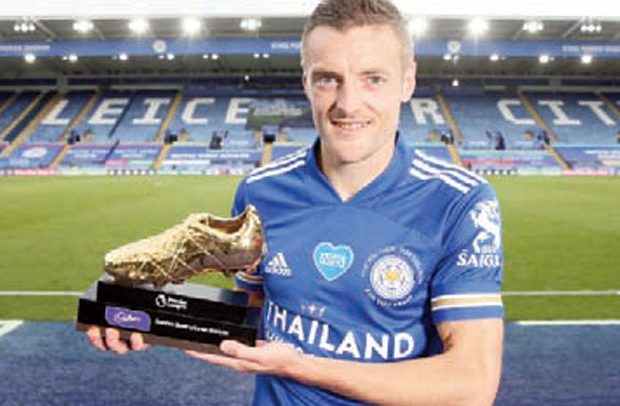 Vardy, 33, becomes the oldest player to win the award.

He scored 23 goals and was given a close run by Pierre-Emerick Aubameyang who scored twice in Arsenal’s 3-2 win against Watford to finish on 22.

Danny Ings, who scored in Southampton’s win against Sheffield United, also finished the campaign on 22.

“It’s a wonderful individual achievement,” Leicester manager Brendan Rodgers said. “We wouldn’t be where we are without his quality and goals.

“He’s a joy to work with, has a great mentality and has such quality. It’s a huge accolade and we’re all delighted for him.”

Raheem Sterling was just behind on 20, while Salah finished on 19.

Manchester City goalkeeper Ederson earned a clean sheet in his side’s 5-0 win over relegated Norwich while Pope was unable to shut-out Brighton in a 1-1 draw.

City midfielder Kevin De Bruyne, who equalled the league assist record in a single season, praised Ederson for picking up the prize.

“If you end up the season with that many clean sheets it means you’ve done quite well,” he said.

“In the five years I’ve been here our defence has been criticised a lot, but I think we do fairly okay. We lost some points this year. He’s been great since he’s been here.”