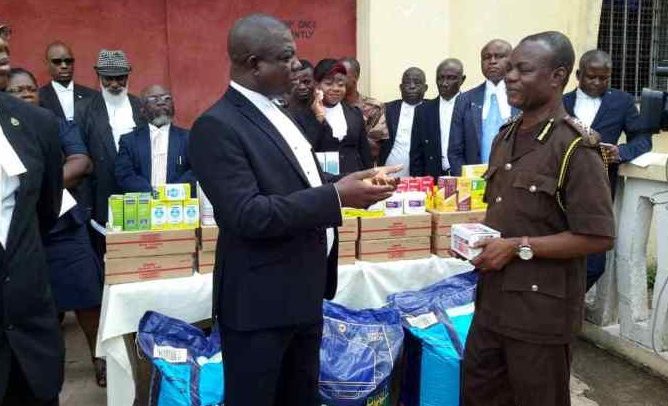 Members of the Ghana Bar Association (GBA) in the Volta Region have donated some items to the Ho Central Prisons in the Region.

In a brief ceremony, the association presented bags of rice, toiletries and medical supplies valued at GH₵3000 for the upkeep of the prison inmates.

The gesture according to the Volta Bar President, Mr. Michael Zewu Glover was part of activities marking the 37th Martyrs Day celebration. Martyrs Day is a remembrance ceremony in honour of the three Justices, who were gruesomely murdered on June 30, 1982 during the military junta.

The Martyrs Day was instituted by the Ghana Bar Association and the Judiciary in remembrance of Justices, Fred Poku Sarkodee, Cecilia Koranteng-Addow and Kwadwo Agyei Agyapong, who were alongside a retired army officer, Major Acquah, abducted from their homes and cruelly murdered at Bondase Military Firing range during the junta.

The Officer In-Charge of the Ho Prisons, Victor Agbelengor received the items on behalf of the inmates and expressed gratitude to members of the Volta Bar, assuring that they will be appropriately used.

He also urged other organisations, groups and individuals to emulate the gesture as it will go a long way to make the life of inmates better.

Present at the event last Friday, were some members the Volta Bar, including the Secretary, Nelson Kporha, as well as the bench, led by the Supervising High Court Judge, Justice Eric Baah. Other members of the bench present were Justice, Mattew Kyeremanteng of the Ho High Court, the Circuit Court Judge, Her Honour Priscilla Dikro and Magistrates of the District Court, Robert Addo and Kwaku Ansah.

Centre Of The World Golf Set To Rock Tema