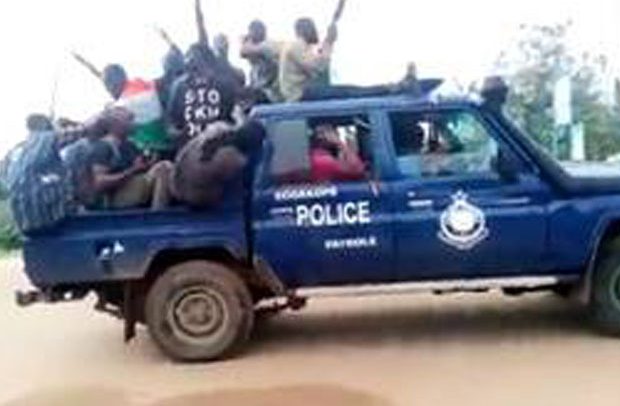 It has emerged that the recent violent attacks by some people in the Volta Region, purporting to push a so-called Western Togoland agenda, were ‘diversionary’ tactics deployed in order to hit their intended bigger targets.

The Volta Regional Minister, Dr. Archibald Yao Letsa, in an interview on a radio station (Kuul FM) in Ho yesterday, revealed that but for the vigilance of the security agencies, there would have been more devastating attacks by the group whose activities, the government has declared, should be treated as criminal and not political.

Less than a week after rioting, attacking police stations and blocking vehicular movements on busy highways close to Juapong on the Accra-Ho highway as well as the Accra Aflao highway, they burnt down two State Transport Corporation (STC) mini buses in Ho on Tuesday dawn, as part of their effort to ‘secede’ from Ghana.

The Volta Regional Minister although refused to give more details on ‘security grounds’, he said intelligence pointed to a number of key installations in the region as the actual targets.

However, realizing the difficulty in proceeding with their plan, the group, out of ‘frustration’, resorted to blocking highways and later attacking the STC bus terminal.

Dr. Letsa noted that his position as Regional Minister and Chairman of the Regional Security Council (REGSEC) makes him privy to a lot of information and operations that cannot be made public for the safety of the people and the country at large.

He said ‘politically influenced’ claims that the government is instigating the confusion in order to send soldiers to the region as the election draws near “are laughable and a clear indication of ignorance or dishonesty on the part of the NDC members.”

“Where I seat, I am privy to a lot of information. The kind of things that come to me, you can never know. But for their vigilance what would have happened would have been terrible.

“The road blocks were an act of frustration because they could not hit their targets. Every situation that happens must be analyzed. We could have cleared the road in 10 minutes, but it was diversionary,” he noted.

“We did not want the public to be caught in the crossfire. We needed to protect human lives and reduce casualties to the barest minimum,” he added.

The minister said the STC attack was also as a result of failed attempts to attack other places, and it was for this reason that the Municipal Chief Executive, Prosper Pi-Bansah, said security was heightened at the critical places intelligence picked for the attacks.

“So you see that the STC was an afterthought. It was out of frustration,” the minister made it clear.

He stressed that the security has so far performed creditable, adding that “the situation is not out of control. The security is in charge. I won’t fault the public who are ignorant of the security issues and operations for their comments against the security operations, but the end will justify the means.”

“This is an operation that is in progress. I cannot disclose more to the public, but they should know that it could have been worse,” he reiterated.

He appealed to the public to have faith in the government and the security agencies and work closely to stem the tide.