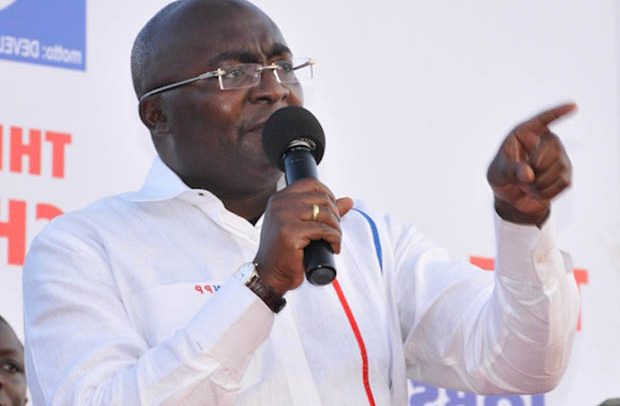 Vice-President Dr. Mahamudu Bawumia has said the New Patriotic Party (NPP) government is interested in working hard to bring an enabling environment for more jobs to be created for the youth instead of encouraging vigilantism.

He said the NPP administration had identified quality formal education as the key to national development. He added that giving hope to the youth in the areas of jobs would dissuade majority of them from joining vigilante groups that are mostly exploited by politicians to cause mayhem.

“We need ‘joblantes’ not vigilantes,” he said at Kawukudi Junction near Nima in Accra on Wednesday when he continued his tour of the Greater Accra Region.

He said the manifesto promise of former President John Dramani Mahama and his NDC to build mortuaries in Zongo communities (Muslim-dominated communities) was unfortunate because that is not what the people need at the moment.

“There are so many developmental needs of the Zongos but certainly mortuaries are not a priority.When we are retained in office, we are going to build model senior high schools in Zongo communities,” he promised the people.

“We need knowledge, education; that is where we are putting our emphasis on, not mortuaries. We in the NPP have a different emphasis for the Zongos. Our focus is on building schools but the NDC prefers to build mortuaries. That is the choice we have to make in our communities,” he said.

The Vice-President later granted an interview to ‘Asempa FM’ in Accra and cast doubt on the credibility of promises being made by the flagbearer of the opposition National Democratic Congress (NDC), describing ex-President John Dramani Mahama as the “Archbishop of promises!”

“Mahama has said he was not going to promise again. But today, he keeps promising, and he is the Archbishop of promises. That is why I am saying that the manifesto promises by the NDC is an empty one,” Dr. Bawumia said.

“He lacks credibility because he failed as a President and he was voted out,” he fired, adding, “He is also inconsistent. He says one thing today and changes his position tomorrow.”

“He cancelled teachers’ trainee allowance and said he won’t restore it even if it would cost him the elections. Later he said he did not cancel it. He introduced teacher licensure exams and now he is going round telling teachers that he will cancel it. He introduced the law to ban Okada, now he says he will legalize it. He cancelled Arabic instructors allowance and now he says he will pay Arabic instructors,” Dr. Bawumia fired.

The Vice-President continued, “He said Free SHS was 419 and that Free SHS would collapse our educational system. Now he says he will expand Free SHS to private schools. How can you expand something you said was 419?”

He stressed that the former President has a proven track record of broken promises and non-performance so his new promises should be treated as empty.

“They have been in power for eight years, but they were unable to pay simple GH¢70 million teacher trainee allowances. But now, they are promising US$10 billion Big Push. They don’t have the credibility.”

“Where is the credibility? Where is the consistency? Mahama is not a new person. That is why I say he has no credibility and that their manifesto is not credible. It is a Kwatrekwa manifesto. If a naked person promises you cloth, just look at the person,” he added.