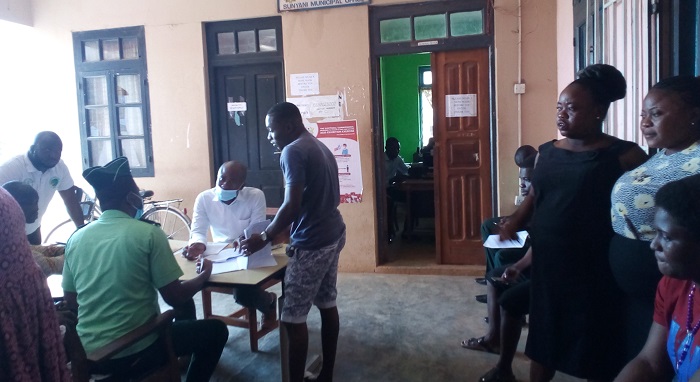 Voters at Sunyani East EC office to do transfer of votes

Some voters in the Sunyani Municipality have trooped to the Sunyani East Electoral Commission office to transfer their votes in an exercise which commenced on Tuesday and is expected to end today.

According to officials of the commission, the transfer was meant only for SHS students and security personnel who registered at certain locations due to their movements and want to vote in preferred polling stations.

Explaining the modalities involved, Jonah Seli, a deputy returning officer, said voters who wished to transfer their votes are supposed to apply to the district returning officer giving reasons as being a student or working in any of the security agencies.

As at 11:55am when DAILY GUIDE visited the EC office on Tuesday, only eight voters had successfully been able to effect their transfers, though there were more voters in a queue waiting for their term.

Mr. Seli stressed that one did not need to pay any amount for the transfer.

He said after filling a form known as ‘application for transfer’, a voter needed to be validated by a commissioner of oath.

When asked if it would be extended to the general public who wished to make transfers, he explained that could only be explained by the Electoral Commissioner, saying it is a policy decision.

He said although the exercise includes voters wishing to apply for proxy voting, as at the time DAILY GUIDE visited, no voter had applied for the proxy process.