We have Never Prevented Voltarians From Registering – Volta NPP 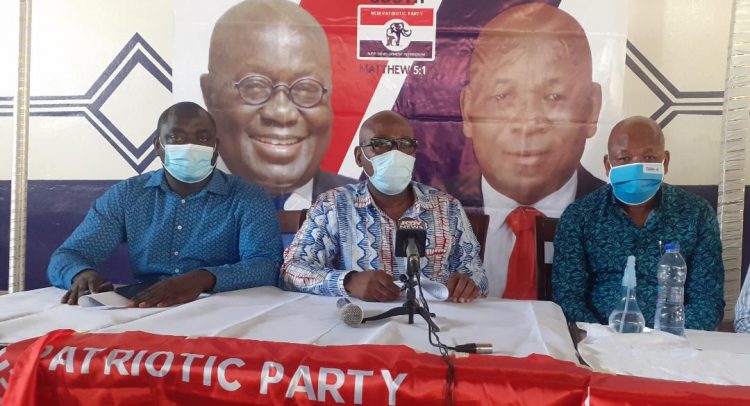 Chairman Makafui Woanyah in the middle.

The governing New Patriotic Party (NPP) in the Volta Region has assured people of the region to feel free and partake in the ongoing registration exercise.

This is because there is no iota of truth in allegations that people in the region who are bonafide Ghanaians are being intimidated or prevented from registering.

Instead, persons whose nationality are in doubt are challenged at the registration centres as required by law. This exercise is what has been misconstrued to mean “Ewes are not Ghanaians”; an NDC propaganda which has unfortunately misled the entire country.

The party gave this assurance at Aflao in the Ketu South Constituency during a press conference addressed by the Regional Chairman of the NPP, Makafui Woanyah.

Mr Woanyah wondered how he and his party members could look their own people in the face and prevent them from registering adding that “no one has NPP or NDC or CPP written on their face.”

To this end, it was counterproductive for anyone; be it NDC or NPP to prevent people from registering when you could not even tell who they would vote for.

Contrary to claims by the opposition National Democratic Congress (NDC) that registration exercise was full of gloom, violence and intimidation in Ketu South, the NPP described the exercise in the region and Ketu South in particular as peaceful.

Chairman Woanyah also stressed that Volta region is not the property of the NDC because if it were they would have developed it long ago.

However, the level of underdevelopment in the region is testament to the fact that the NDC is only interested in votes and the interest of the people.

To this end, persons on social media either in the region or other parts of the country, including Voltarians in the diaspora should disregard the tribal and ethnic bigotry being used to whip up support for the NDC.

Instead they should subject such claims to strict proof including evidence of the impact of the NDC in the region they call their stronghold.

2 Nigerians Die In Clash Over Woman At Kasoa