We Won’t Subvert Sovereign Will Of Ghanaians – NPP

The ruling New Patriotic Party (NPP) says it has no intention whatsoever to use incumbency advantage to subvert the sovereign will of Ghanaians during the December 7, 2020 elections.

Ghana is heading to the polls tomorrow, Monday, December 7, 2020.

Over 17 million Ghanaians will be casting their ballots across 38,622 polling stations.

About 275 Members of Parliament are expected to be elected in a race the incumbent President Nana Akufo-Addo is seeking a re-election.

And in a statement signed by its General Secretary, John Boadu, the NPP said “we believe that the Ghanaian people will renew our mandate based on our unassailable track record of achievements.”

In the statement which was in response to NDC press conference, the NPP noted that “all the processes that have been put in place thus far to ensure credible and transparent elections in Ghana – transparent ballot boxes, bio-metric verification devices, and photo I.D. were processes that were championed by the NPP with stiff opposition from the NDC.”

According to the NPP, “on the contrary, all acts of thuggery and political trickery that have surfaced in our democratic practice like ballot snatching and stuffing were introduced by the NDC.” 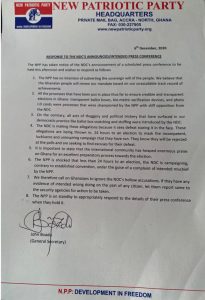