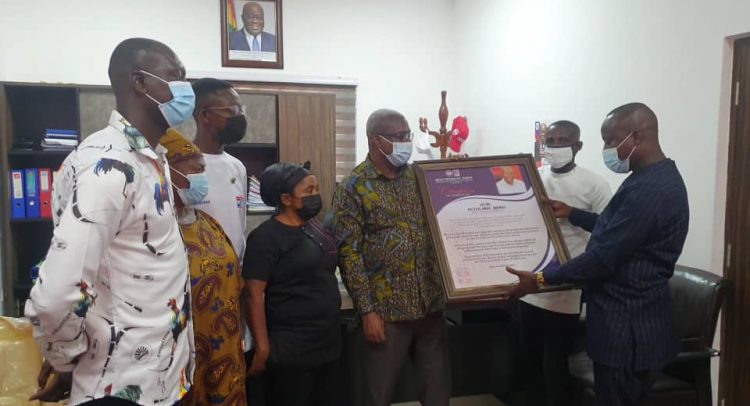 A six-member delegation of the NPP Western North Grassroots Agenda (WENGA), has paid a courtesy call on the 2020 Campaign Manager of the ruling NPP, Peter Mac Manu at the Party’s Campaign Office in Accra.

In his opening remarks during the visit, Mr Mac Manu welcomed and thanked the delegation for taking the initiative to visit him.

He was particularly excited that members of a region where he was once a Regional Chairman had come to visit him.

He thanked them for the various roles they played during the 2020 Campaign and Elections.

On the whole, the region did well but could have done better by securing more seats for the NPP, he said.

He went through a recap of the parliamentary elections with the delegation on each of the nine constituencies.

Mr Mac Manu did an assessment of the number of votes obtained by each of the parliamentary candidates.

In response to Mr Mac Manu’s comments on how better the party could have performed in the just-ended elections, members of the delegation attributed various reasons to why certain constituencies could not be won.

Speaking on why they had come from the Western North Region to visit, the leader of the delegation, Isaac Amanor, said that, they had come to show appreciation for the enormous support they received from Mr Mac Manu during the campaign period.

They were full of praises for the Campaign Manager for the exemplary leadership he exhibited throughout the campaign in the run up to the general elections.

They claimed it was the likes of Chairman Mac Manu who encouraged some of them to give their best in ensuring the party did well in the elections.

Mr Amanor admitted the fact that they could have done better and hence had learnt enough lessons to apply in the next election.

The delegation presented a citation to Mr. Mac Manu as an expression of their gratitude towards his contribution to the greater good of the party.

They encouraged him to continue playing important roles in keeping the party together for the many battles ahead.

Chairman Mac Manu also expressed his gratitude to them for the honor done him. He promised to continue playing his role as he has always done.

He also promised to continue to support the region in various ways to help build and most especially establish NPP’s total dominance in the region as a political party.

In his closing remarks, Chairman Mac Manu admonished the group to continue working in unity as a team to improve the electoral fortunes of the NPP in the region.

Meanwhile, the delegation expressed gratitude for the appointment of Dr. Kwaku Afriyie, MP for Sefwi Wiaso as Minister for Environment, Science, Technology and Innovation and Rocky Obeng as the Regional Minister. They pleaded with Chairman Mac Manu to also lobby for more competent and qualified individuals from the region to occupy positions in government to uplift the image of the region and also bring development.

In response, Chairman promised to do his best. He assured them that just as article 35 (6) (b) of the 1992 Constitution subscribes to regional and gender balance in public appointments, all 16 regions will have a fair representation of persons appointed into public service, and that the Western North Region will certainly not be left out.

Two Crushed To Death With Corpse