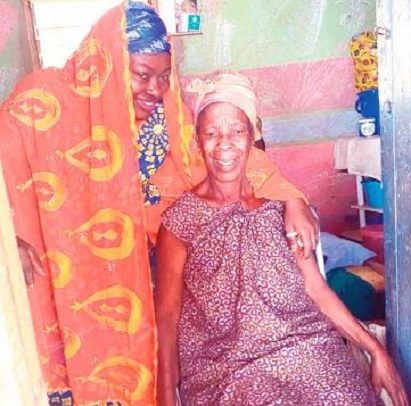 A physically challenged old woman in Oyibi, a suburb of Accra, was all cheers last week when she received a wheelchair from the recently registered Oyibi Muslim and Children Foundation.

The Founder of the Foundation, Hajia Khadija Ali, who is also the Magajiya of Oyibi Zongo, after the presentation told DAILY GUIDE that she intends to put smiles on the faces of widows, orphans and the physically challenged persons within the area.

In this regard, she is appealing to donors within the country and outside to channel their support through her charity organisation so that together “we can make life comfortable for the physically challenged, widows and orphans within the Oyibi Zongo.”

During the last Eid-ul-Adha festivities, she recalled the support she gave the above-mentioned group, a gesture which she said put smiles on the faces of the recipients.

Hajia Khadija Ali was appointed Magajiya or headwoman by the chief of the suburb.