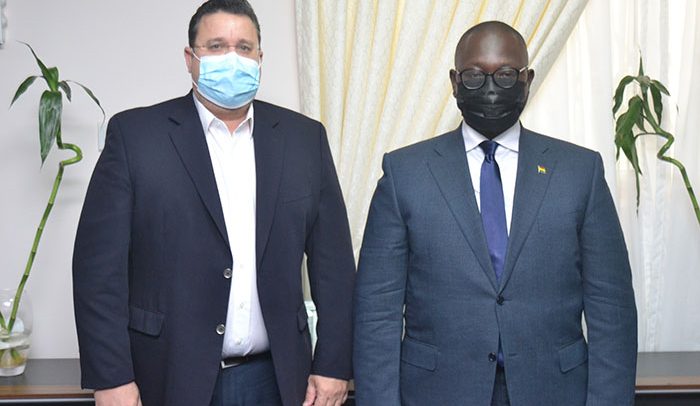 The World Bank has assured government of its support for the Greater Accra Resilient and Integrated Development (GARID) project and other flood mitigation projects being implemented in the country. This was made known by the World Bank Country Director for Ghana, Liberia and Sierra Leone, Mr. Pierre Laporte when he paid a courtesy call on the Minister for Works and Housing, Hon. Francis Asenso-Boakye in his office.

“The World Bank is committed to supporting government’s efforts at mitigating flooding and its negative impacts on the people of Ghana. I appreciate your dynamism and commitment as a Minister and trust that we can work together to find a lasting solution to flooding and sanitation challenges in the country” said the Mr. Pierre Laporte, the World Bank Country Director.

Hon. Asenso-Boakye expressed his gratitude to the World Bank for the continuous support for government’s interventions. He assured the Country Director that the Ministry has already taken steps to address the implementation challenges being faced by the GARID project. 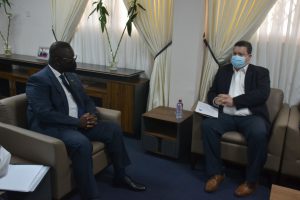 “Finding lasting solution to flooding and sanitation challenges in Ghana is very dear to the heart of this government. That is why we have already taken some pragmatic measures to address the initial implementation challenges faced by the project. We have, for example, set up a land taskforce to address issues concerning land acquisition to be used as temporary and final disposal sites for the dredged materials”

The Minister also noted the government’s intention to expand flood mitigation and drainage interventions to other basins outside of Accra, such as Kumasi, Sekondi-Takoradi and Tamale. He indicated that the Ministry is establishing priority list of the most vulnerable locations for both flood mitigation solutions and early warning systems and will soon approach the World Bank for support.

On Housing, Hon. Asenso-Boakye said, “the issue of Affordable Housing is one of the top-most priorities of Government. We however, identified a gap that must be filled to ensure that the implementation of housing projects continue irrespective of the government in power. As a result, the Ministry would like to reform the institutional framework for housing delivery and accessibility. This is expected to lead to a National Housing Authority and National Housing Fund.”

The Minister, indicated that the Ministry will seek to partner the Bank and its sister agencies such as the International Finance Cooperation and other International Partners to pursue these programmes.

The World Bank Country Director assured the Minister of the Banks’ readiness to collaborate with government to address the housing challenges in the country.