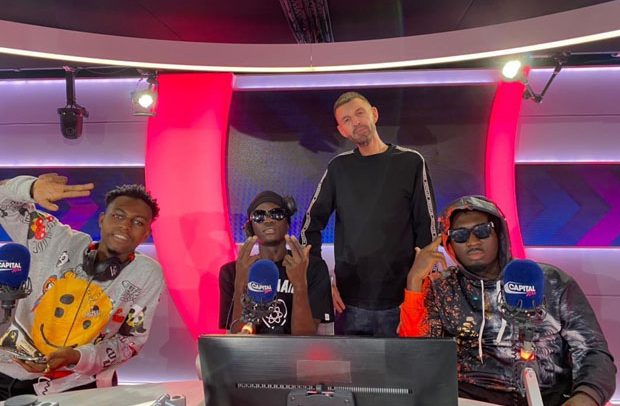 Rappers Yaw Tog, Kweku Flick and Amerado have been trending over their freestyle session on the Tim Westwood’s show in the UK.
The boys delivered what some described as “sick” new radio freestyle. However not everyone is in support of that as there is mixed reactions to whether their performance was top notch or not.
The BBC rap show which is hosted by Tim Westwood is the ultimate desire of many rappers. It previously gave audience to Ghanaian acts like, Sarkodie, Kwesi Arthur, Medikal and Manifest among others.
Yaw Tog, Kweku Flick and Amerado are the new kids on the block who had the honour of gracing the show too during their recent visit to the UK.
Taking it in turns to flow over a variety of different instrumentals, the boys rep hard for Ghana as they showcased their versatility, freestyle skills and their showmanship.
Impressing Tim with their skills, the artistes stayed consistent with their delivery for the audience. They have been trending on social media since videos of their session popped up over the weekend.