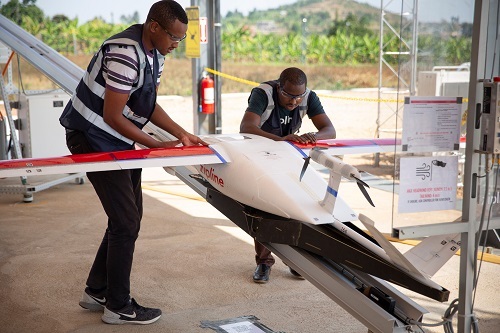 The timely delivery of medical supplies by Zipline’s Medical drone has helped save the lives of 113 students of the Mangoase Senior High School in the Eastern Region.

According to the Headmaster of the School, Seth Tawiah Agbesi, but for the timely delivery of ORS to the school by Zipline drone the fate of the students would have been something different.

The students had suffered acute diarrhoea on Sunday, June 23, 2019, a situation the headmaster attributed to a contaminated food.

He revealed that the diarrhoea outbreak occurred after the students ate groundnut soup with rice as their supper on Saturday evening.

The Headmaster indicated that probably the food was not well-cooked, resulting to the diarrhoea incidence.

According to him, the Health Centre the school authorities contacted advised that Oral Rehydration Salt (ORS) be administered immediately to the students.

However he noted that the medication was not in the school nor the health facility at the time.

“So an order was placed immediately to Zipline Centre at Omenako and within 20 minutes, Zipline sent a drone with five boxes of ORS.

Each box contained five packs of ORS, giving a total of 125,” he said.

Mr. Tawiah Agbesi was full of praise to Zipline, saying “I was very very happy. Really, we have benefited. Initially, I thought it was for big hospitals; I didn’t know it was for those of us in the rural areas.”

A teacher at the school, Justice Siaw, who assisted the nurses to receive the medication, disclosed that some of the students visited the toilet about six times and had become pale making it very critical.

He said the situation became severe but the timely intervention of Zipline gave them a sign of relief.

A Community Health Officer at the Mangoase Health Centre, Bernice Acheampong, revealed that Zipline has been very responsive to their medical needs.

She said “when we are short of drugs and we order, at once, we get it.”

She further explained “before if its emergency and there is no drug, we have no option than to refer the patients to other hospitals, either in Koforidua or Mampong. With the coming of Zipline, our referrals have drastically reduced”.

The service, which is a collaboration between Ghana’s Ministry of Health and Zipline Technologies, would use drones to make national-scale, on-demand emergency deliveries of 148 different vaccines, blood products, and life-saving medications.

The service would operate 24 hours a day, seven days a week, from four distribution centers — each equipped with 30 drones – and deliver to 2,000 health facilities serving 12 million people across the country.

5 Arrested Over Attempted Kidnapping At Daboya

Rewriting The News On Africa