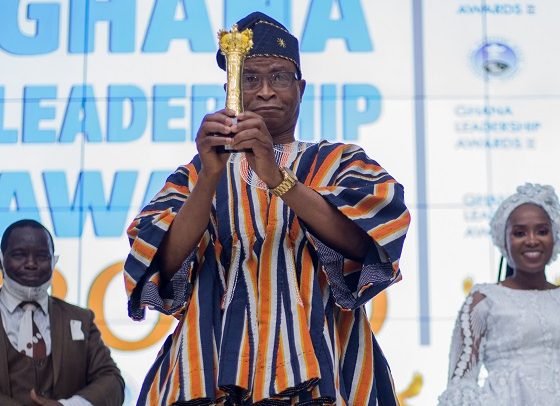 The Chief Executive Officer (CEO) of the Zongo Development Fund (ZDF), Arafat Sulemana Abdulai, has received an award for his outstanding performance and leadership for his role as the head of ZDF.

He was among 30 individuals across the various sectors recognised under the Ghana Leadership Awards scheme for their exceptional services and achievements in their respective fields.

The awards ceremony, which was held at the Ghana National Teachers Association (GNAT) Hall in Accra last Saturday, was also to celebrate individuals making positive impacts in the lives of the ordinary people across the country.

Speaking to DAILY GUIDE shortly after picking the award, the ZDF boss expressed his gratitude to President Akufo-Addo for reposing confidence in him and giving him the opportunity to serve in that capacity.

He thanked the Minister of Inner City & Zongo Development, Dr. Mustapha Abdul-Hamid, staff of ZDF as well as his family for the support he has enjoyed in office.

He reckoned that the award is a call to do more for the overall development of the Zongo communities, intimating that “this award means a lot to us. It means we shouldn’t rest on our oars. It means we should continue what we are doing. It also means the little that we’ve done have been duly recognised.”

“The little that we have done covers all areas of the general well-being of the Zongo people,” he said while touching on some of the interventions his outfit had made in the communities.

“When you enter some of the Zongo communities, you would see mechanised water systems. You’ll see standard classroom blocks. You look at them and you will clap your hands. The designs are unique,” he noted.

“We also have roads and other interventions that impact positively on the lives of the Zongo people directly, including scholarships. As I talk to you, there are about 456 youths in the Zongo communities attending various tertiary institutions who have got something from us in terms of support and grants,” he revealed.

According to Abdulai, his outfit has rolled out a new programme dubbed ‘Zongopreneur’ that is aimed at equipping the Zongo youth with some form of essential life skills in order to improve their living condition.

“We are going to see more and more of such developmental interventions in the Zongo communities,” he assured.