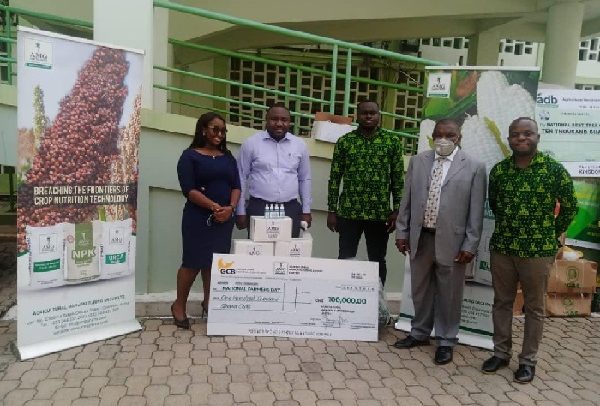 Some 13 companies have moved to support the Ministry of Food and Agriculture (MoFA) towards the successful organization of the 2020 Farmers Day Celebration.

The items donated simultaneously on Wednesday, October 28, 2020, include herbicides, insecticides, fertilizers, tricycles. There were also cash donations from some of the companies.

Kingdom Exim Group specifically donated an amount of Ghc 10,000 to the Ministry of Food and Agriculture (MoFA).
The Group has also donated tricycles, blowers, fertilizers, and pesticides to MoFA towards the celebration of the 2020 Farmers Day.

Partner of Kingdom Exim Group and District Chief Executive (DCE) for Techiman North, Peter Mensah, made the presentation on behalf of his outfit on Wednesday, October 28, 2020.

According to him, Kingdom Exim Group has picked the Tree Crop category to support this year and in subsequent years.

General Executive Manager of Kingdom Exim Group, Iftin Arthur-Afari, said the Group has the Group has deemed it necessary to support the Tree Crop category following the establishment of the Tree Crop Development Authority by President Nana Akufo-Addo.
She says Kingdom Exim Group has been in existence since 2008, operating mainly in the Bono, Bone East Region, Ahafo,Greater Accra and Northern, Upper East, Savana, Regions.

According to her, the Group liaise with farmers of tree crops such as cashew, shea-butter, among others.

Annually, she stated, the Group exports about 50,000 metric tons of cashew alone.

She stated that the Group has undertaken a number of corporate social responsibility initiatives and has won several awards – both local and international.

The Ghana Exim Bank on its part donated a 85 HP 4WD MF tractors and its accessories.

In remarks to hand over the tractor, he said “the Ghana Exim Bank has been a perpetual partner in this annual award event since the days of EDIF, EDAIF and now GEXIM . ie the past 10 years.”

He stated that Ghana Exim Bank believed in the financing of the agriculture sector to play its critical role in the national development, especially adding value through processing to export.

He added that “this year, Mr Minister, we have again acquired a 85 HP 4WD MF tractor and its accessories, at the cost of almost Ghc 362,000.”

He noted that “this support is to motivate and encourage our hardworking farmers and fisher folks to continue to play their critical roles in the economy of Ghana.

Minister of State in charge of Agriculture, Dr. Nurah Gyeile, who received the donation on behalf of MoFA, praised the Group for the support.

According to him, the tree crop sector has received a big boost due to th introduction of the Tree Crop Development Authority.

He was impressed that the Kingdom Exim Group had chosen to support the tree crop category.

The Minister thanked the other donors for supporting the Ministry to honour farmers.