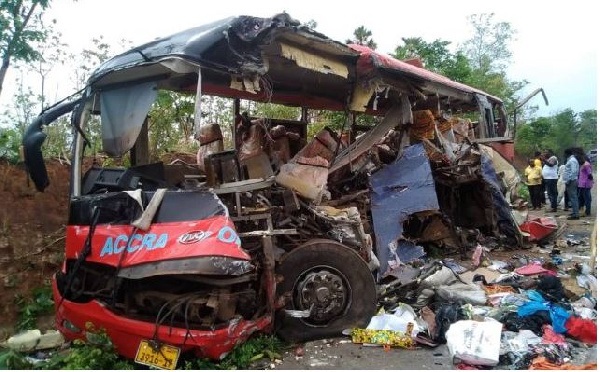 Two lives have been lost and 15 people injured in another car crash on the Buipe-Temale highway near Sarekyekura, in the Central Gonja District of the Savannah Region.

According to an eyewitness report, the incident toccurred on Wednesday at 10:00 p.m.

Reports say the crash occurred after one of the tyres of a blue KIA Sky bus with the registration number GR 7287-21 got burst, resulting in the death of two and 15 persons being injured.

According to information gathered by DGN Online, the incident occurred at the exact point where the two Yutong buses had crashed, killing about 19 persons and 50 injured on February 3th this year.

The two deaths recorded and 15 injured persons add to the total 51 passengers reported to be on board in the KIA Sky bus traveling from Garu in the Upper East Region to Kumasi in the Ashanti Region.