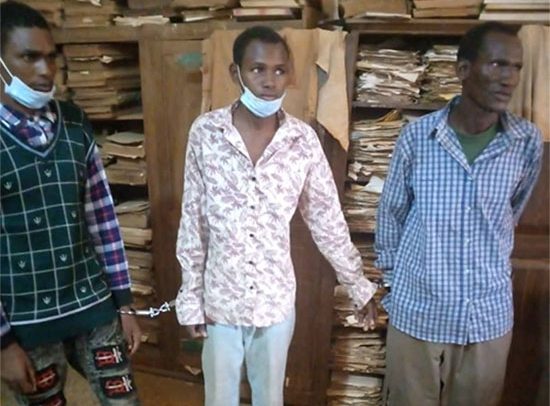 Members of a gang who engaged police officers in a shootout during an attempted robbery have been jailed for a total of 60 years by the Bekwai Circuit Court in the Ashanti Region.

Umar Sandah alias Boobey, 59, Saadoh Ali, 23, and Jibor Ali, 28, exchanged fire with police officers from the Jacobu District Police Command who were on patrol duties at about 10:30pm between Hemang and Akokoaso on the Kumasi-Obuasi highway on May 10, 2021.

They were found guilty for two counts of conspiracy and attempted robbery and each sentenced to 20 years imprisonment in hard labour by the court presided over by His Honour Mark Doboro.

Detective Chief Inspector Stephen Ofori, prosecuting said that the gang, numbering four and wearing masks, emerged from a nearby bush to prey on the police officers after mistaking their vehicle for a commercial bus.

The robbers, upon realising that the occupants were police officers, opened fire on them and the police also returned fire, killing one of the robbers in the process.

The three others, who are Fulanis and natives of Fadankruma in Burkina Faso and Sokoto in Nigeria, attempted to escape the gallant policemen and were arrested.

A short single barrel gun, a machete, two torchlights, two live AAA and two spent AAA cartridges were retrieved from them at the scene.