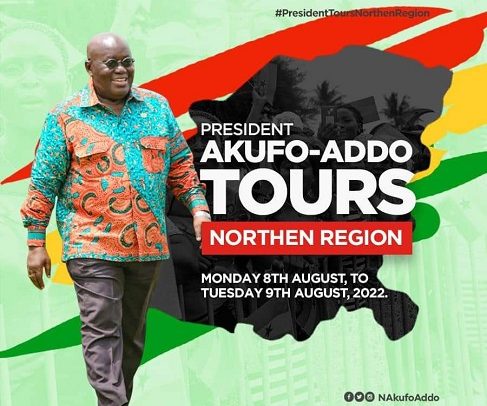 President Nana Addo Dankwa Akufo-Addo is taking his regional tours to the Northern Region part of the country on Monday, August 8.

The President will be inspecting some projects in the Region during the two-day tour of the Region.

He is scheduled to make appearance on North Star Radio, where he will grant an interview.

Soon afterwards, the President will proceed to Yendi, where he is expected to pay a courtesy call on the King of Dagbon, Ndan Yaa-naa Abukari II, at the Gbewa Palace and subsequently cut sod for a dual carriage Eastern Corridor road in the Yendi township as well as inspect the work on the Yendi Sports Stadium.

Immediately afterwards, the President will move to Saboba to inspect Agenda 111 project.

The subsequent day, President Akufo-Addo will visit Kpandai to inspect New Administrative block and Agenda 111 project and return to Bimbilla to cut sod for the construction of the Eastern Corridor road in the Bimbilla township and inspect a 1D1F project.

Besides, the President will also commission a new administration block at Bimbilla College of Education.

On the final day of the tour, President Akufo-Addo will inspect progress work on a new Presidential Lodge Complex at the Northern Regional Cordinating Council.