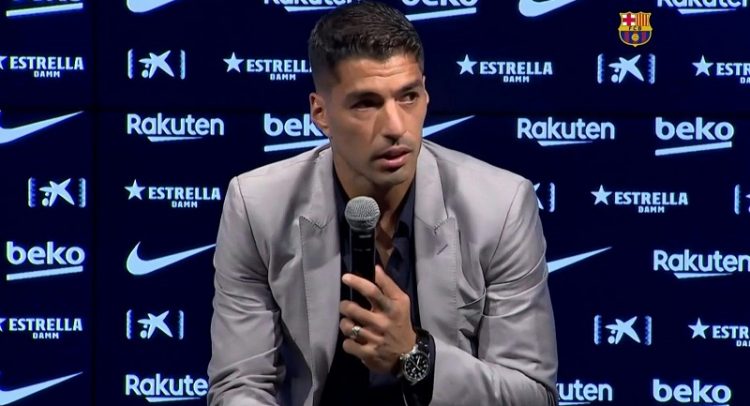 Luis Suarez broke down in tears at his Barcelona goodbye press conference and nodded in the direction of president Josep Bartomeu when asked if he had any reproaches over his forced departure.

He kept his counsel for the most part with the president alongside him and a favourable deal to join Barcelona’s rivals Atletico (Atleti) Madrid already sealed, but he did condemn lies and leaks that he said had marked his final weeks at the club.

With teammates Lionel Messi, Jordi Alba, Gerard Pique, Sergio Roberto and Sergi Busquets looking on at the Camp Nou, Suarez could barely get the words out as he tried to make his last speech as a Barca player.

He referenced the club’s faith in still signing him from Liverpool in the summer of 2014 despite his bite of Giorgio Chiellini at the World Cup, which led to a four-month ban from all football activities.

He only got as far as ‘I want to thank’ before he had to stop to compose himself.

He then thanked the club saying, “They knew I had come from making that mistake (the World Cup bite) and they still wanted to support me and bring me in.

“It was a dream for me to play at the best club in the world. I have made many friends too so that also makes me very happy.

“It’s a player leaving but it is also a human being with feelings who goes. I want to remember all the nice moments, the titles, the goals and the chance to play with the best player in history.”

But asked if there were any reproaches he nodded Bartomeu’s way and said, “For me or for …”

He said, “The club needed changes and the coach didn’t count on me. I want to show that I can still perform at a high level.

“When the coach told me I knew because it was already done.

“It was a crazy month. Things have been invented and leaked, there are things that leave you feeling indignant.

“I’m joining Atletico Madrid with a lot of excitement, but I still haven’t thought about what it will be like to play against Barcelona. I haven’t fully digested it yet.”

“I’m joining Atletico Madrid with a lot of excitement, but I still haven’t thought about what it will be like to play against Barcelona. I haven’t fully digested it yet.”

Suarez has scored eight goals in 18 appearances against Atletico during his career, so Diego Simeone’s side will certainly be pleased that he is now playing for them.

The Uruguayan will be determined to prove to Koeman that he made a mistake in letting him leave.