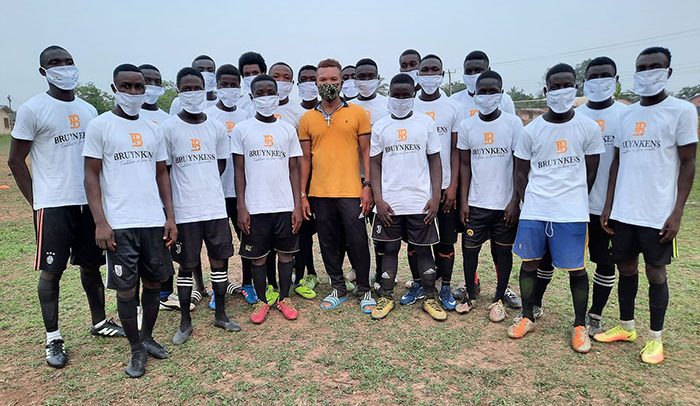 Asare with players of the academy

Former Ghana defender, Emmanuel Asare, has told the youth, especially players of Asarit Academy that one of the surest ways to get to the top in football is esteeming discipline.

The former Okwawu United right back has charged young players to be self-motivated and strive for excellence in their endeavours.

And using himself as a typical example, he told his football academy (Asarit) he did not allow deceased coach EK Afranie’s discouragement to affect him negatively.

Currently on holidays from his Belgium base, he told the academy that he took his destiny into his hands, which earned him national team invitations.

“Training is the key, and you must not indulge in bad associations, immoral behaviours like drinking, smoking and womanizing,” said Asare.

He commended C.K. Akonnor, his Black Stars play mate for qualifying for the next African Cup of Nations in Cameroun.

Asare also commended his wife, Rita, for rallying behind him in managing the football academy which seeks to support deprived young talents from villages.

He added, “We are proud of our sponsor Bruynkens Vlesswaren, they have really supported the academy, and we are indeed grateful.”

Meanwhile, the former Black Satellites defender who now manages Asarit Football Academy at Akutuase in the Eastern Region has praised Coaches J.E. Sarpong and Francis Oti Akenteng for encouraging him as a footballer when growing up.

He also commended stalwart defender Agyeman Duah aka ‘Rambo’ for inspiring him to become one of the best in Ghana, Africa, Europe and the world.

Asare is considered as one of the most disciplined players featured for the Black Starlets, Black Satellites and the Black Stars.

He was a member of the victorious U-20 squad who excelled at the African Youth Cup in Mauritius and the FIFA U-20 in Australia in 1993.

We Are Not Back To Dumsor - Energy Minister