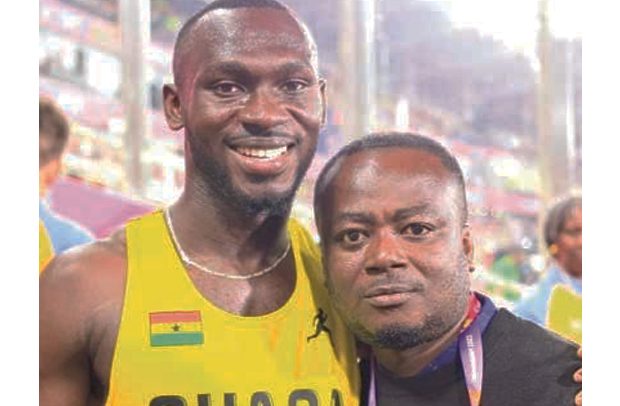 Azamati with a Ghanaian journalist after the race

BENJAMIN AZAMATI has narrowly missed winning a medal in the 100 meters race at the Commonwealth Games.

The Ghanaian ‘super’ sprinter finished fourth in the 100 meters finals, just behind the medal winners.

As usual, Azamati’s poor start in races, once again popped up as he started the race a bit slow.

After the 50m mark, it was clear that Azamati, who had then found his rhythm, would need a ‘magic’ to win it.

This is because, the three runners ahead of him were also determined and poised not to cede their positions.

Despite his last minute efforts, Azamati could only finish at the fourth position, thereby failing to win a medal.

Speaking to journalists after the race, Azamati said even though he couldn’t win a medal, “I will bounce back stronger.”

According to the sprinter, he would surely work on his slow start before he hit the tracks again to compete.

Sounding like a good loser, Azamati said he would not attribute his set back to anybody.

“I have no excuses to give, the winners deserved it,” he said “I am not disappointed so I will move on.”

Azamati said even though he deserved a medal, “everything happens for a reason in life” so he would just put the medal failure behind him.

Azamati with a Ghanaian journalist after the race